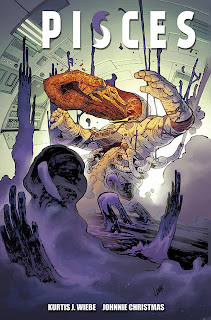 Image continue to publish an impressive range of titles, and a great example of that this week is Pisces. The book follows Patrick Keene, a Vietnam veteran suffering from the strangest of flashbacks and waking nightmares. We're two issues in, and the reality behind what he's experiencing is still a complete mystery to me. It's got me intrigued as all hell though.

The book is written by Kurtis J. Wiebe, best known for the acclaimed and award-nominated Rat Queens. This is a very different kind of book, both in look (the Johnnie Christmas artwork is great) and tone. It's sort of a science fiction thing - it keeps jumping to maddening scenes of Patrick as an astronaut and then back to his post-war life in Miami - but at the same time it's a deeply effective psychological thriller.

I actually have no idea how long this book is intended to run. I assume it's a miniseries, but haven't bothered to check. I don't need to check. I picked up the first issue based on Wiebe's name and it's entertaining me so far. This second issue is stronger than the first, suggesting this might be one of those series that just picks up steam as it goes. (4/5)

Under the cut: reviews of Black Widow, He-Man: The Eternity War, Indestructible: Stingray, The Infinite Loop and Transformers: More Than Meets the Eye.

The long, twisted story of Natasha Romanov versus Chaos finally comes to a close with an issue that provides an oddly truncated climax and a very satisfying epilogue. The climax itself is over and done with within pages - Natasha winning out in a logical manner, but somehow making me feel a bit cheated as a reader at the same time. The epilogue is much better, putting Natasha forward in a new direction and resolving her various conflicts with SHIELD, the Avengers and her handler. It feels like a final issue, and to be honest I assumed it would be, but apparently there's an issue #19 in a few weeks that crosses over with Secret Wars. I think I may skip that. (3/5)

30 years into the future King He-Man rules over Eternia as a tyrant. It's a dream sequence of course, and we know it's a dream sequence, so all there is to much of this issue is a page by page wait until He-Man wakes up and the story begins again. There are a few neat touches - the future Beast Man wears Battle Cat's skin, for example, and a few of the more ridiculous action figure characters show up - but altogether this is a pretty terrible issue. This series has only ever really worked as a broad nostalgia piece, but now it's plot seems to be floundering and running in circles. (1/5)

This one-shot provides an origin story for Stingray, a supporting character from Indestructible - which I must admit I've never read. Taken on its own merits, however, Stingray is an entertaining introduction to a bickering superhero team and an Aquagirl-esque super-heroine on her first few days of the job. The influence of DeMatteis and Giffen's Justice League International is pretty obvious, and the book does a pretty good job of puncturing sexist superhero art while indulging in it a little at the same time. There's a lot of good stuff in here, including some very nice plot developments that hint at a lengthier series somewhere down the road. This is by no means a must-read, but it's a solid one-off superhero story if all of the Convergence and Secret Wars tie-ins are wearing you down. (3/5)

I loved the art of Infinite Loop's first issue, but I was pretty underwhelmed with Pierrick Colinet's story, which follows a time-travelling agent named Teddy who eliminates time anomalies - until she meets an anomaly in human form. This second issue is a significant step up in quality, as the agent and anomaly go on the run and fall in love. It's a wonderfully inventive science fiction lesbian romance with beautiful artwork like a 1960s cartoon, neat panel layouts and very creative storytelling. It also cleverly balances whimsical humour with more serious moments. I think I'm hooked. (4/5)

Transformers: More Than Meets the Eye #41

This comic is simply wonderful. Essentially they've made a sitcom out of Transformers: a bunch of Autobots and a bunch of Decepticons are on a spaceship travelling through the depths of the galaxy having meandering conversations and generally being dickish towards one another. It does take a little to make sense of who's who, since they're all similar-looking giant robots, but the dialogue is snappy and the art and colours are engaging. There's even space for a bit of plot and a genuinely creepy cliffhanger ending. It's marvellous stuff. (4/5)
Posted by Grant at 9:30 PM