Robin of Sherwood: "The Witch of Elsdon" 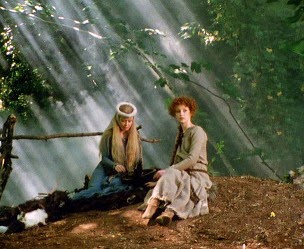 In the Nottinghamshire village of Elsdon, an innocent woman named Jennet (Angharad Rees) is falsely convicted of witchcraft. To earn her freedom, she agrees to help lay a trap for Robin Hood (Michael Praed) and poison his entire band of outlaws.

As Robin himself tends to say, 'nothing lasts forever'. That includes the quality of the series it seems, as things take an unexpected but definite nose-dive with this third episode. Subtlety is gone, depth has left the building, and what's left is some pretty tedious one-dimensional characterisation. Will Scarlet (Ray Winstone) is particularly ill-served by the script, which takes his character from aggressive attitudes and violent tendencies to puppy-dog eyes without any sort of proper justification.

It was only two episodes ago that Will spoke of his wife's rape and murder, and visibly displayed the sort of broken, bristling rage that now drives him forward in life. It's the rage that earned him his nickname 'Scarlet', and seemed - back then at least - to be a core aspect of his character. Here he stumbles into Jennet of Elsdon and suddenly he's all besotten and charmed in the most over-the-top fashion. It's not believable, and part of the episode's problem is that Winstone doesn't seem to find it very believable either.

So there's the waiting for the trap to be set, and the inevitable wait to find out that the trap has been cleverly reversed by Robin, and then the expected final scene where a wounded Will resents that Jennet never loved him at all, and the rolling of credits.

It's not all dire. I remarked last time that Robin and Marian's romance and marriage in "Robin Hood and the Sorcerer" seemed remarkably hasty and ill-considered. This week it seems as if Marian is wondering the same thing. It's genuinely nice to see the character go through a mild life crisis as she weighs up whether or not life in the forest with a gang of outlaws is what she actually wants, and Judi Trott plays it remarkably well.

This is, all up, a dreadful episode, and easily missed. It does still leave Season 1 with two good episodes out of three. A quality ratio of 67 per cent is not too bad, all things considered. Let's just hope things improve with episodes four through six.
Posted by Grant at 8:48 AM