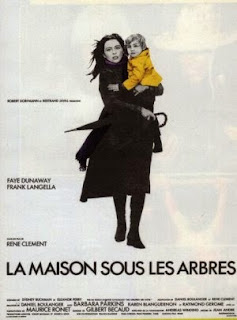 Jill (Faye Dunaway) cares for her two children while her talented scientist husband Philippe (Frank Langella) works in Paris. Jill's memory is slipping and Philippe is growing concerned with her increasingly tenuous grip on reality. Then a former employer makes threatening overtures for Philippe to return to their employ, and their children both go missing.

The Deadly Trap (originally titled La Maison sous les arbres) is a 1971 French thriller directed by René Clément. Clément was for a time a major creative force in French cinema, but as was often the case his star faded as audience tastes changed. By the time of The Deadly Trap's production he was very much at the tail end of his career. Certainly this film - which is almost exclusively performed in English - doesn't indicate much to suggest that Clément was a significant auteur of French film. It's competent, and fairly entertaining, but it lacks the originality or the emotional impact to really linger hard in the memory.

Faye Dunaway is the most impressive element in the film. She has a remarkable character arc throughout the film: beginning on such a carefree and whimsical level, but who slowly grows more distrustful and paranoid as the film goes on. When her children go missing, it seems like there is a real chance her neglect has caused them both to drown, and Dunaway does a sensational job of performing the trauma and dread of a parent who might have killed her own children.

Frank Langella is a solid supporting actor. It was only when watching this film that I realised I had never seen one of his early performances. To be Langella is the fierce white-haired star of Frost/Nixon and the like, and not the rather handsome and sensitive black-haired academic he plays here. If his performance is less impressive than Dunaway's, it's only because his character doesn't have as much with which to work.

The narrative, sadly, doesn't contain too many surprises. It is fairly easy to predict the plot twists as they come, and there's nothing here that comes as a tremendous surprise. Nonetheless it's effective to an extent and provides an overall entertaining if melodramatic experience. In many ways its story of families torn apart by paranoia in a European city prefigures later, more effective, films such as Don't Look Now and Frantic. Sadly The Deadly Trap only approaches the quality of those later thrillers in momentary fits and starts.
Posted by Grant at 7:34 AM