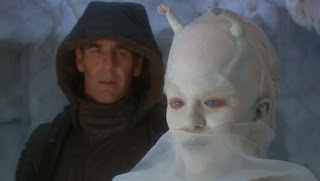 Analysis of the brain waves of the Romulan drone's controller reveal it to be similar but not identical to an Andorian. This prompts Commander Shran to reveal the existence of the Aenar, a white-skinned, blind and telepathic sub-species of Andorian living in isolation on his home planet. While Shran and Archer attempt to contact the reclusive Aenar, T'Pol, Trip and Dr Phlox work to develop a device that can enable them to hijack and deactivate the drone when it resurfaces.

Much of this episode takes a rather different tack to the previous two parts, and that's probably a good thing. We've had two weeks of diplomacy and cloaked Romulan attacks, so this third time around a lot of time is spent in ice caves on Andoria. It's a decent plot thread: the Aenar, when we meet them, are interesting and engaging, and the storyline showcases a different and refreshing side to Shran. In many ways it's rather unfortunate how fascinated Enterprise's writers are with Shran, because they're writing such good material for him while neglecting half of the series' regular cast. We're only a dozen episodes or so from the end of the entire series, so I'm assuming Mayweather's chance to be fleshed out and given some actual material has pretty much run out.

Alexandra Lymon does a great job as Jhamel, a young Aenar woman who assists Archer and Shran in contacting the drone pilot - her kidnapped brother. There's a beautiful relationship built up between her and Shran - this really is his episode more than any of the regulars - and Lymon gives a great performance from underneath a pile of prosthetic make-up.

Less effective are scenes between Trip (Connor Trinneer) and T'Pol (Jolene Blalock). By the episode's end Trip is requesting a transfer off the Enterprise, claiming his handling of the telepresence emitter put people's lives at risk, but it's clear he just wants off the ship and away from T'Pol. The problem is that the emotional arc that's led him to this point feels badly truncated and doesn't ring true. We'll find out next episode, but right now it feels like a clumsy attempt to shoe-horn the plot into whatever happens next.

The Romulan plot is ultimately resolved very quickly and almost arbitrarily. With so much time spent developing Shran and Jhamel there really wasn't much time for anything else. It's not entirely satisfying, but at the same time it does its job and gets out with efficiency. Altogether this storyline has been much, much better than the previous two attempts, and while I probably preferred the first and second parts this third and final episode is pretty entertaining.

This episode was Mike Vejar's final gig directing a Star Trek episode: he came to the franchise after working as one of Babylon 5's main directors, and helmed 31 episodes out Deep Space Nine, Voyager and Enterprise.

It leaves Season 4 with eight good episodes out of 14, and a quality ratio of 57 per cent. Here's hoping that ratio continues rising.
Posted by Grant at 9:02 AM