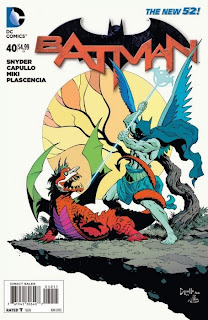 After a two-week delay I finally have a copy of Batman #40 in my hands and, since it's a pretty significant issue in terms of the current storyline, I figured it was worth reviewing it in its own blog post. So here it is: the final instalment of writer Scott Snyder and artists Greg Capullo and Danny Miki's "Endgame" story arc. The Joker has returned, not to taunt Batman but to kill him, and the issue begins with all of Gotham in chaos, half its people infected with a psychotic gas, and the combined villains of the city all teamed up behind Batman to finally bring him down. No pressure.

The issue is split pretty neatly into two halves. Firstly there's the fight on the streets, where the Joker appears to get the upper hand - until he discovers it's all been a ruse. It's Dick Grayson in the Batsuit, and the real Batman is deep in the cave system beneath Gotham looking for the unexplained pool of healing liquid that can cure the entire city.

Of course as soon as he realises he's been fooled, the Joker's down in the caves as well, and once he confronts Batman the issue's main sequence kicks into gear.

It is a really brutal fight, one that brings Frank Miller's The Dark Knight Returns to mind. There are stabbings, lacerations, and acid thrown directly into faces. Someone loses an eye. Someone's spine is broken. By the end of it, both men are lying near death in a pool of their blood. Rather beautifully, for all the blunt violence, the blood is in the shape of a broken heart.

And at that point, both Batman and the Joker die. Alfred is inconsolable. The sky above Gotham is filled with Batsignals. It turns out Bruce Wayne left a note, but this is it - Batman is dead. It turns out the title, "Endgame", was exactly what it said on the tin.

Except of course it isn't. It's not just that Batman and the Joker die just metres from an enormous pool of mysterious life-restoring goo, it's that if you examine the panels in the final pages with even the slightest amount of care you can see Bruce and Damian Wayne walking down the street - clearly injured, but recovering. The thing is, this isn't some sneaky twist placed in advanced to allow for a shock return down the line. Snyder, Capullo and Miki aren't even hiding it. They're not idiots. They know we're not fooled. Of course Batman will return.

So what they've achieved here, within the limitations of the endless Batman serial, is the final Batman story. They know his adventures will never end, so they've written a story that allows the narrative to end for now. It's a marvellous way of having your cake and eating it too, because while we know Batman will never die we've also had the chance to see how he would. Taken in that light, it's a marvellous story, and the best arc the team has produced since "The Court of Owls" back in 2011. The art is great, the story is clever, and the pacing - helped by an extended page count - is spot on.

Once Convergence is out of the way, the same team will be back to present the "new" Batman: former police commissioner Jim Gordon in a GCPD-financed robotic Batsuit. I can't wait to see what that storyline is going to be like. Then, after they've exhausted the possibilities and showcased their best ideas with the "Robo-Bat" set-up, I can't wait to see how they bring Bruce Wayne back. (5/5)
Posted by Grant at 10:02 PM