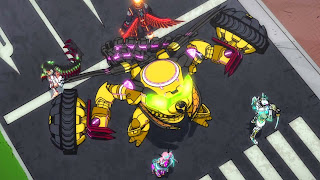 In episode 10 of Gatchaman Crowds Katze sends the Crowds after Japan's Prime Minister, forcing the Gatchaman team to return to action to prevent mass casualties as the Crowds tear Tachikawa apart. It's basically the episode I expected last time, with climactic action sequences, high stakes and a real push forwards in terms of story.

It's great action too, as we finally get the entire Gatchaman team together and transformed, and engaging in the sort of pitched battle most of the audience expected from episode one. Even Joe is back, in one of the episode's strongest moments as words of encouragement from Sugane finally prompt him to have more faith in himself and to return to duty. Also back in action is Paiman, who's provoked into fighting when the kindergarten from a few episodes back in threatened with harm. These sorts of character moments act as wonderful pay-offs for some of the series' more quiet episodes, and it's hard not to get swept up in the enthusiasm.

The episode begins with a conversation between Katze and Hajime, and I'm really liking where this odd relationship is going. Katze is an uncontrollable, wildly chaotic alien, and while it causes great harm to those around it, it basically just wants to play. Hajime appears to be the only person willing to engage with Katze on that level, and as a result has managed to get further than anybody in actually getting close to Katze and shutting its plans down.

I'm also fascinated by the series' portrayal of Japan's Prime Minister. He's a listless, unenthused sort of a guy, too miserable to properly lead his country but too jealously possessive of his power to step aside and let someone else take control. His scenes in Gatchaman headquarters with Paiman and OD are brilliantly funny, and led me to wonder if there's an element of political satire going on here.

This episode hits the ground running and rockets all the way to a brilliant climax: the Gatchaman team reunited, ready for action, surrounded by Crowds. Two episodes to go. With eight good episodes out of 10 so far, the quality ratio is up to an impressive 80 per cent.
Posted by Grant at 7:41 AM