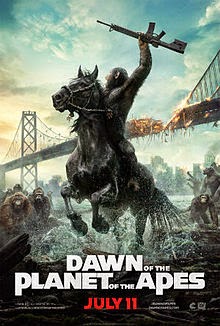 2011's Rise of the Planet of the Apes was a hugely unexpected movie for me. I had been anticipating a complete disaster - Planet of the Apes was a great concept in the late 1960s, but Tim Burton's 2000 remake had seemed to demonstrate pretty conclusively that the concept didn't work in a contemporary film context. Too silly. Too easy to ridicule. Then along came Rupert Wyatt's film, which took an unexpectedly realistic approach to the idea, and I was pretty conclusively proven wrong. That film ended in a wonderfully open fashion as well, as a deadly influenza strain bred in a San Francisco laboratory started to spread across the world killing most human life as it went.

Dawn of the Planet of the Apes, directed by Cloverfield's Matt Reeves, picks up the story 10 years later. A small community of humans remain holed up in what's left of San Francisco. In the nearby redwood forests a parallel community of mutated, highly intelligent apes have formed their own primitive society. When a group of humans track into the woods in an attempt to restart a hydro-electric power station, these two communities collide with disastrous consequences.

Technically Dawn is, like Rise before it, a visual marvel. It's a movie with a large cast of chimpanzees, gorillas and an orangutan, and yet no actual animals were used in the filming at all. Instead it's all been achieved with motion capture, some immensely talented actors, and computer graphics. Andy Serkis, who remains the poster child for motion-capture performance, returns as the ape leader Caesar, and he and the visual effects team create a three-dimensional and nuanced protagonist. If anything it's superior to Rise, but then it's being made three years later with a larger production budget and all of the experience gained in making the earlier film.

The film begins promisingly, contrasting the two communities well and demonstrating just how much they also have in common. Both communities have two protagonists: among the apes there is Caesar (Andy Serkis) and the scarred, militaristic Koba (Toby Kebbell), and down in the city there is Malcolm (Jason Clarke) and Dreyfus (Gary Oldman). Both Caesar and Malcolm are reasonable, intelligent people who want peace - and were events purely left to them there could easily be peace between humans and apes. Koba and Dreyfus both distrust the other's species, and act as the film's antagonists.

So far so good, but the problems kick in when the filmmakers - whether director, writers, producers, who knows? - elect to take the easier, more simplified route and sideline Dreyfus while transforming Koba into a clear-cut villain. I can imagine taking Dreyfus off the screen for the bulk of the movie is the result of editing: it's an Apes film, and the audience likely want as much ape-centric action as the budget will allow. It does make for a rather odd and abrupt character arc, however, and the way Dreyfus acts in the climax doesn't seem to match his behaviour and intelligence during the film's earlier scenes. It's a missed opportunity.

More difficult to negotiate is Koba. At the beginning of the film he makes a lot of sense: he was experimented upon quite violently by humans, and naturally refuses to trust or like them. He sneaks into San Francisco and discovers that Dreyfus' men are unpacking and testing machine guns for a potential assault on the apes. So far so good. He then takes a staggering right turn, betrays Caesar, orders an all-out brutal assault on the humans and then starts randomly murdering any apes who refuse to tow his party line. It ruins the character, and while watching the film I found it impossible to take seriously. For 50 minutes or so he's an interesting and well-written character able to become an opposing force to Caesar without resorting to comic book villainy. By the film's climax he's as good as twirling a moustache. Rise of the Planet of the Apes impressed me so much with its intelligent and thoughtful take on the material. It's a pity Dawn of the Planet of the Apes doesn't get that benefit.

The climax itself, with Caesar and Koba resorting to hand-to-hand combat on the top of a half-constructed tower block, is rather unimpressive. One of my least favourite things in Hollywood is when a big-budget action film climaxes with a fistfight between two visual effects, and that's exactly what we get here. There's not a lot of character being expressed, and there's no real attempt to integrate humans and apes together in the scene. As the sequence appears to be entirely rendered in computer graphics, it all becomes a bit difficult with which to engage and I found myself drumming my fingers waiting for the inevitable conclusion. Apart from the few dubious shots of chimpanzee babies early in the film it's the only scene where the CGI doesn't quite stand up to requirements.

It's all a maddening experience, because - over-confident climax aside - Dawn looks and feels like a genuinely brilliant film. The actors - when not under-utilised like Gary Oldman - give effective performances. The visuals are generally fantastic. The plot is a by-the-numbers disappointment. It's not a bad film, but after the exceptional Rise it's definitely a somewhat disappointing one.
Posted by Grant at 4:48 PM