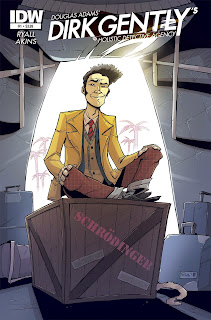 It's always good to see Dirk Gently get more attention. Douglas Adams wrote two Dirk Gently novels - Dirk Gently's Holistic Detective Agency and The Long Dark Teatime of the Soul - and while they never gained the popular appeal of his Hitchhiker's Guide to the Galaxy works I always felt they were actually much better books. Now the character is making a fresh jump to comic books in an all-new ongoing series from IDW.

This first issue does an outstanding job of adapting the character with a story that seems right up Adams' alley: an Englishman in San Diego, amateur serial killers, and revived Egyptian mummies all thrown into one complicated string of interconnected things.

If there's one major criticism, it's that Dirk himself has undergone a bit of a redesign: less overweight redhead and more, well, David Tennant's Doctor Who, basically. Asides from that, this strikes me as the best adaptation of the character I've seen. (4/5)

Under the cut: reviews of Empire: Uprising, Kaijumax and The X Files.

Mark Waid and Barry Kitson's dark future thriller continues. The supervillain Golgoth successfully destroyed the world's heroes, and for many years has ruled the Earth with an unfallible might and merciless authority. Now his subordinates fear he may be starting to slip up. This issue sees one of Golgoth's lieutenants investigate fraud and insurrection in one of Golgoth's satellite African nations. It's a great expansion on the world introduced in issue #1, showcasing a growing range of characters and revealing the extent of Golgoth's rule - not to mention the growing rebellion against him. It's great stuff that's both entertaining and distinctive. (4/5) 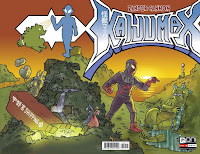 Prison guard Gupta is on the take and gambling up a huge debt in the casino. New prisoner Electrogor is terrified for the safety of his children, and has made an enemy of the prison's toughest gangs. And Gupta watches over the prisoners while transformed into an enormous alien warrior, and the prisoners are all giant monsters. It's a neat conceit, and while it's not a faultless book it is a pretty fun and enjoyable one. Cannon's cartoony artwork certainly keeps the tone pretty light, even when the story can a little bit less humorous. I'm not loving this book, but I'm certainly liking it - and I suspect the right audience will love it to bits. (3/5)

Mulder's on the run in Cuba with an old enemy as his only friend, while Scully races to save him from an old friend turned enemy. This is continuity porn of the highest order, but to Joe Harris' credit it's continuity that rings true to the source material and altogether it's a pretty entertaining comic. That said, I'm not sure where this comic goes from here. Now that the TV series is coming back for six more episodes, pretty much everything depicted in the last two years is going to be moot. What's the impetus to continue reading? (3/5)
Posted by Grant at 9:02 PM