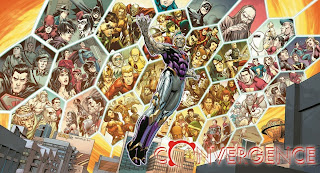 April 2015 is an odd month for DC Comics. Here's why. The publisher is moving its offices for the first time, shifting everybody from New York to Los Angeles. The move is intended to align the company more closely with Warner Bros, who own DC in its entirety and have a lot of intellectual property invested in what DC publishes. Shifting the whole enterprise coast-to-coast is major disruption, however, so rather than try and edit and publish its entire line at the same time DC created Convergence.

In short, Convergence is a weekly miniseries backed up by 40 new two-issue comic books published in April and May. These two-issue series each bring back older storylines and continuities from DC's long history, mashes them together and makes them fight. As a self-contained two-month storyline, Convergence could be edited and managed by a temporary team leaving all of the regular DC editorial staff time to make the move, settle in, and get a solid head start on what the company has planned for the second half of the year. Putting aside the actual storyline of Convergence, which has by-and-large not been well liked by critics or readers, you might think this was actually a pretty clever idea. It's not: it's a terrible idea, and DC has thrown money away by doing it. Here's why.

Comic books in the USA, Canada, Australia and a bunch of other territories are distributed via an American company called Diamond Distribution. They service what's referred to as "the direct market": basically about 2,600 independent comic book retailers. Retailers need to order their stock about two months in advance, so if it's May now then those store's buyers and managers are currently finalising their orders for July. Obviously there's a complex art to ordering comic books that's going to vary from store to store, but one thing that's pretty common between them is that you can order stock for two months from now based on what you're selling in your right this week. Batman selling 40 copies in May? You can probably expect to sell about 40 copies again in July - maybe a little lower, if readers are slowly dropping off, maybe a little higher if there's a new creative team or something.

The problem for Convergence is that it's a two-month event, so a buyer ordering in April's comics in February had absolutely no idea how well or how badly the event was going to sell, and even once he or she reached April and could see the figures, it wouldn't help them order Convergence anyway because they submitted their May order back in March. Basically the entire enterprise: a nine-issue weekly miniseries and 40 two-issue tie-ins - 89 books in total - had to be ordered completely blind with only a vague idea of how well or how badly they would sell. DC Comics clearly recognised this, because they made Convergence returnable: if the books don't sell, comic shops can get their account credited for the leftover stock. Diamond Distribution apparently takes returnability into account, so the sales data that get published by the likes of Comichron are actually a bit lower than what actually left DC's warehouse.

Now back in March the average units shipped per book was only 29,343 - but that was an odd month, because several of DC's best-selling titles including Batman and Justice League didn't ship that month. So let's jump back one month to February, where the average was a slightly more reasonable 32,059 units, and assume that's our baseline. This means the Convergence tie-ins sold, on average, 30 per cent more units than their regular equivalents.

That's a great sales boost for DC - unless you compare Convergence to DC's other recent line-wide crossovers. Back in September 2014 all of the regular titles were supplanted by special Futures End tie-ins. The average units shipped per book for that event was 66,793. That's 60 per cent higher than what Convergence managed. Why did that sell so much better?

I think a big reason was that while Futures End supplanted the regular storylines for a month, it didn't actually supplant the titles - so if you were reading Aquaman and the Others, you could simply read Futures End: Aquaman and the Others that month. It was easier for comic shops to order it in because they knew a lot of people who had regular orders for DC titles would simply read through Futures End without adjusting their order. This hasn't been the case with Convergence: readers had to specifically want to read Infinity Inc or Plastic Man and the Freedom Fighters (no really, they published this) in order to buy it. I think that's part of why this event has sold so much less than all of the previous crossovers of recent years.

I'm very interested to see how DC fares in May as well, because these 40 tie-ins have very similar storylines: a set-up in issue #1, a hero vs hero fight in issue #2. They're all priced at US$3.99. How many readers are going to come back for the second half of a lot of these books? How many copies are going to be sitting on comic shop shelves waiting to be returned?

Still, a 30 per cent sales jump is nothing to be sniffed at - unless you think about it, and realise they could have done much better. This doesn't include the weekly miniseries, mind: regardless of quality it's been selling incredibly well. It's with these 40 tie-ins that I think they've dropped the ball.
Posted by Grant at 9:32 PM