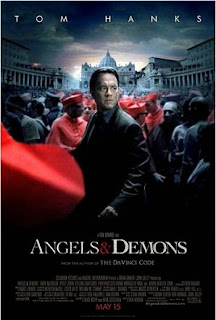 Don't think. That's pretty much the core requirement to enjoy Angels & Demons, Ron Howard's 2009 adaptation of the popular Dan Brown novel. I read the novel back in 2006 while on a lengthy holiday in Europe. I was aware of Brown by repute - hugely popular, badly written, and so on - and figured it would be a silly and enjoyable read. To an extent it was, although the enjoyment was largely gained by reading select passages aloud to my wife and laughing as she accused me of making them up.

The plot, which if you've not read the book nor seen the film I promise you is not a lie: the Pope has died, and when the assembled Cardinals are locked inside the Vatican to elect his replacement the four most likely candidates are kidnapped. At the same time the kidnapper has hidden an anti-matter bomb somewhere on the premises. It's all down to Robert Langdon (Tom Hanks), a Harvard professor of symbology, to track down the kidnapped Cardinals, find the bomb and save the day.

The book was the first of (to date) four Robert Langdon novels, however when it came to adapting them for cinema Columbia Pictures elected to start with its more popular sequel The Da Vinci Code. That film was a dreary, over-important mess of portentous dialogue and crass stupidity that I found genuinely difficult to sit through. For Angels & Demons, replotted slightly to become the second film, the crass stupidity remained but the over-importance was jettisoned. This is pure dumb action cinema: fast, frantic, disposable entertainment - and it benefits immeasurably from that approach.

Angels & Demons is, at its heart, two hours of Tom Hanks running from one Rome landmark to another in a series of chase and action scenes. The scenes are well shot and paced. Hanks is an engaging and earnest lead. Yes the plot is ridiculous, and the character motivations all highly suspect and unconvincing, but the lesson director Ron Howard has appeared to have learned from Da Vinci Code is that if you do it all quickly enough the audience is less likely to notice. Certainly the reviews for this film, while generally ambivalent, were a damned sight better than Da Vinci Code received. The film also benefits from a solid supporting cast including Armin Mueller-Stahl, Ayelet Zurer, Ewan MacGregor and Stellan Skarsgård. They - Mueller-Stahl in particular - give the story a sense of gravitas where on its own merits it probably has none.

The film uses its Roman setting to great effect, and its large budget affords it a good simulation of the Vatican using purpose-built sets and computer-generated backgrounds. If you're going to distract an audience from how silly your story is, shooting around Rome's most famous cathedrals and architectural landmarks is a pretty solid way to do it. The baroque traditions and rituals of the Catholic Church also provide an evocative backdrop, that is used without ever feeling particularly disrespectful.

The bottom line for me is twofold: firstly, that the story on which the film is based is inescapably risible; secondly, that as a viewer I simply don't care all that much. Angels & Demons gets in, has a lot of fun with its concept, moves along at a rattling pace, and gets out before you've had the chance to notice just how awful it really is. If the ultimate purpose of a feature film is to entertain its viewer, I'm not going to lie: Angels & Demons leaves me pretty well entertained.
Posted by Grant at 6:31 PM