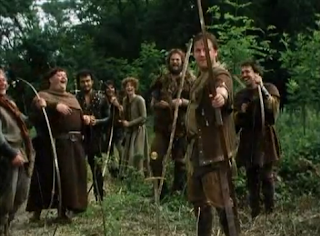 Shortly after an encounter with a wandering thief in the forest, Robin Hood (Michael Praed) and his band of outlaws are attacked by a group of seven knights on horseback. Friar Tuck (Phil Rose) identifies them as members of the Knights Templar: religious zealots best known for mass murders in the Middle East. When the Templars successfully capture Much (Peter Llewelyn Williams) Robin is forced to negotiate and retrieve their stolen religious icon.

Like "The Witch of Elsdon", "Seven Poor Knights from Acre" feels as if it's been pitched at a slightly younger audience that the opening two-parter. I suspect it's all a part of the series attempting to find its feet. Here we've got a fairly simplistic story, but unlike "Elsdon" it's a story that still feels rather entertaining and is certainly much better told.

The Knights Templar are a rich source of history and mythology for the series to tap into, and they do come across as a genuine threat. Even the Sheriff of Nottingham (Nickolas Grace) seems to be suitably afraid of their reputation for extreme violence and mass homicide.

Speaking of the Sheriff, he and Gisbourne get a rather good conversation in this episode about the differences between Saxons and Normans, and what it means - if anything - to actually consider oneself English. I really do like Grace's performance in this series, and Richard Carpenter's take on the Sheriff. He's still the evil villain, sure, but there's a nice element of politics to the guy as well - as evidenced by his hasty diplomacy to avoid Gisbourne getting killed at the hands of the Templars for disrespecting them.

The Templars are shot very effectively as well, with numerous early shots showing scenes from a Templar's point-of-view: letter-boxed from inside their helmet. Generally speaking the episode is well produced and visually interesting, again much more in keeping with the two-part debut than the previous week's effort.

Simon Rouse plays Siward, the rogue thief whose stealing of the Templars' icon leads to all of the trouble facing Robin. It's always fun to see Rouse on-screen since he's so overwhelmingly linked to The Bill. He's actually rather good here, and certainly makes it harder for me to see him as Superintendant Meadows that it usually is.

Yves Beneyton plays Reynald de Villaret, the Templar commander. He's got an odd name for a Templar, since his 14th century namesake Foulques de Villaret was actually the leader of the rival Knights Hospitaller, whose order benefitted enormously from the suppression and persecution of the Templars in AD 1312. Beneyton is reasonably effective in the role, although his bright red dyed hair does make him look a little unconvincing as a late 12th century religious zealot.

This episode's a lot of fun. It's not as accomplished as the two-part pilot, but still manages to be an entertaining hour of family entertainment. It brings Robin of Sherwood's first season up to three good episodes out of four, with a quality ratio of 75 per cent.
Posted by Grant at 9:01 AM