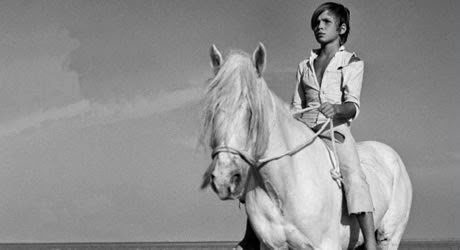 Albert Lamorisse was a French filmmaker who all-but guaranteed his place in film history with his 1957 short children's feature The Red Balloon, which was awarded the Palme d'Or at Cannes. He was also, by the by, the inventor of the popular board game Risk. Less famous than those two cultural artefacts is his 1953 short feature White Mane, which predates The Red Balloon by four years but which already demonstrated a remarkable filmmaking talent and which still stands up as a wonderfully entertaining film today.

White Mane is set in the salt marshes of Carmague, France, where a group of ranchers attempt to corral a band of wild horses. One horse, a particularly wilful stallion named White Mane, constantly escapes them. While they continue to chase the horse down, it befriends a 12 year-old boy named Folco who works as a fisherman through the marshes. The boy and the horse bond as they escape the increasingly desperate ranchers.

It's an unusual film, as it almost entirely lacks dialogue and relies instead on a gentle, storytelling-like narration (by Jean-Pierre Grenie). It's also rather short, running to 47 minutes in total. It is also shot in a rather direct and stark manner. There is no flashy or inventive camera work, and the editing is deliberately slow and methodical. Parts of the film are shot as documentary - including a rather violent and confronting fight between two corralled horses. Other parts, primarily the climax, almost reach a sort of magical realism.

The plot is slight and takes its time, and this leaves a lot of time for the film to show long, stark takes of the Carmague marshes. It's an unearthly, rather uninviting sort of terrain, and certainly far beyond the sort of countryside I'm used to seeing in French films. The slow pace gives Lamorisse the opportunity to indulge in some genuinely wonderful film sequences. In one we see Folco work at home with his sister and grandfather - the scene doesn't advance the plot much at all, but makes for a richer background and environment. In another, Lamorisse dedicates several long takes, shot from quite a difference, of Folco and White Mane chasing a small rabbit across the salt flats. The imagery, shot in a stark black and white, is often extraordinary.

It is undeniably a film made for children, and yet it's an uncharacteristically dark film for children to watch. In a few scenes White Mane appears to be in genuine peril. The fight between two stallions in the corral visibly draws blood as the horses kick and bite at one another. The film's ending is either whimsically sweet or bluntly tragic, depending on whether you want to believe the narration or the visual images.

I liked this film a lot. While it's The Red Balloon that continues to get most of the critical attention, I think this earlier film offers a hell of a lot. It's a small-scale, high-contrast oddity, with imagery that sits in the mind long after the film is complete.
Posted by Grant at 7:37 PM