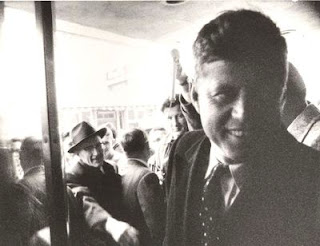 In 1960 United States Senator John F. Kennedy ran for President, and his first step in that process was the primary election to win the Democratic Party nomination. This process kicked off with a primary election in the state of Wisconsin, against Minnesota Senator Hubert Humphrey. In a then-unique move, both campaigns agreed to have their activities recorded by a team of documentary filmmakers.

The resulting documentary film, Primary, was the first of its kind for American film: not because it provided such an intimate glimpse into America's political process, but because it was the USA's first major example of cinema verité (then described as 'direct cinema'). There's very little narration. No one is interviewed. Instead what you see is simply what happened when the cameras are rolling.

These days this is a pretty standard way to shoot a documentary. In 1960 it must have been extraordinary. By using small handheld film cameras the crew are able to insert themselves right into the action, whether it's Humphrey speaking to an audience of disaffected farmers or Kennedy slowly making his way through a throng of supporters to reach the stage. The documentary is only an hour long, but it packs a lot of impact into those 60 minutes.

It's rather telling to see how much the two campaigns differ. Humphrey presents himself somewhat like a car salesman: lots of greeting random strangers on the street, shaking their hands, handing them his card. When he speaks it's generally to small groups of people. I have no idea how he came across to the voters of 1960, but to a documentary viewer in 2015 he's more than a little creepy.

Kennedy, by contrast, is more like a rock star or charismatic cult leader. He speaks to packed halls of supporters, who all sing "High Hopes" as he enters. He's interviewed on television. It feels, at least from what's presented here, that he's ahead of his time in present a very media-savvy, mass market campaign that all but drowns out Humphrey's grass-roots efforts.

Of course we know the result going in, so it's not a huge surprise to see Kennedy win the Wisconsin primary. Humphrey didn't ultimately walk away empty-handed either, replacing Lyndon B. Johnson as Vice-President after Kennedy's death in 1963. This is a fascinating documentary all the same. It has two historical values: firstly as a peek into US political history, and secondly as a milestone in documentary filmmaking. One of the filmmakers involved, D.A. Pennebaker, went on to direct The War Room which is probably the best political documentary I've ever seen. It's great to see where he got started.
Posted by Grant at 3:20 PM