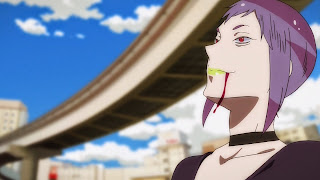 It's the final episode of Gatchaman Crowds. The Crowds have overrun Tachikawa. Berg Katze seems impossible to defeat. The Gatchaman are not strong enough to push back the tide of destruction. It's time for the final showdown - and so on and so forth.

The series concludes on a high note. That's the first and foremost thought on my mind. There's always a risk with a serial narrative of screwing up the climax, and it's fantastic to see just how effective and satisfying this conclusion is. It's dramatic, thrilling, funny and more than a little sad. It boasts multiple pay-offs for the audience, and even a couple of surprises.

The first thing that happens is that OD, the playful androgynous Gatchaman who never transforms, challenges Katze to a duel and not only transforms but damn near defeats Katze all by himself. It's a stunning, cataclysmic battle that pretty much destroys Gatchaman headquarters in the process.

OD has been a great character: playful and flirtatious when the other characters are around, mournful and solemn when alone. It's clear he's got an enormous back story to him, and a personal grudge against Katze. The aftermath of their fight sees Katze almost completely destroyed in the ruins of the headquarters. OD puts up one last playful facade to hand Rui's stolen NOTE (the super-powered notebook that allows one to use Gatchaman powers) back. As soon as Rui's out of sight, OD collapses out of shot. He isn't seen again this episode, and the clear implication is that he's dead. If he is, it's a great exit, and gives the episode a cost for the characters' victory.

Back in control of X and Galax, Rui opens the CROWDS up to every Galax user in the world, and constructs spontaneous games for over a million participants to play. Want to fight back the remaining rogue CROWDS? There's a game for that, and points to win and rankings to top. Want to help with the recovery? Play the rice-ball making game, or the debris-clearing game. Everyone plays them using their smartphone, but alien powers create a physical avatar to do the task in the real world.

It's the final answer to one of the series' core struggles. Rui wanted to change the world by democratising it, but he failed because he didn't democratise it enough. Once everybody can play as a CROWD, the system corrects itself as social order is re-established. It's a marvellously uplifting conclusion to the series, and offers a great set-up for the future; what would happen in a world where anyone can log onto social media and become a super-powered creature?

In the end, of course, there's still Katze. He's a homicidal maniac, whose only purpose is to arrive on a planet and drive its population towards self-destruction. Through the entire series the only character to relate to him in any way has been Hajime, because she's only ever connected to him on his own terms: she treats him as a game, and maintains a sense of play. Once Tachikawa is saved, Hajime goes to the street corner where she promised Katze she would be. She calls her mother, and lightly tells her - rather mysteriously - that she'll always be the same person on the inside. In her back pocket is Katze's NOTE.

The next thing we know it's a year later, Hajime is on her way to school, and she's playfully chatting to an angry, trapped Katze voice inside her own head. It's not really explained what's happened. To be honest I'm quite happy not having it explained. She assured Kazte she didn't want to kill him, and she hasn't. He is, however, trapped, and her with him, and that appears to be the end of it. It's a haunting, very troubling ending: no explanations, no clarity, and no proper resolution, just doubt and unease. It's brilliant.

Hajime's ending is the final stroke of the brush in forming a fantastic character. She started the series so bright and optimistic, and almost gratingly cheerful, and she's ended it superficially in much the same fashion. She spent the whole series with nothing but faith: faith that the public would accept the Gatchaman, faith in her companions to stand up and fight Katze, and faith in Katze to play by the rules of their game and allow her to win. She's a genuinely rare character: an optimist who's ultimately proven correct. She's made a tremendous impact on me.

In July a second series, Gatchaman Crowds Insight, debuts on Japanese television. I guess we have to wait and see what happens next. As for this first season,it finishes up with nine good episodes out of 12, and a healthy quality ratio of 75 per cent.
Posted by Grant at 7:40 AM