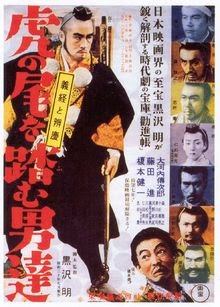 Let's have a look at Akira Kurosawa's fourth feature film, The Men Who Tread on the Tiger's Tail, which is to be honest more interesting for when and how it was produced than what it's actually about. Kurosawa originally wanted to direct a large-scale feudal epic titled The Lifted Spear, however it required battle scenes with samurai on horseback. With Japan losing its war with the Allies there simply weren't any horses left in or near Tokyo for Toho Studios to use. As a low-budget back-up the studio suggested Kurosawa adapt the kabuki play Kanjincho (The Subscription List). The film was ultimately shot almost entirely inside a studio with only a brief trip to the nearby Imperial Forest to shoot some establishing scenes.

The play, based on a true event from the 12th century, followed a disgraced feudal lord as he crossed a heavily guarded border with his retinue disguised as itinerant monks. Kurosawa was not keen on making the film, but its subject matter of feudal loyalty and bravery in the face of certain defeat was appealing to Japan’s military authorities. Kurosawa wrote a screenplay for the film in three days, keeping the narrative relatively close to the original play. The only significant addition he made was to introduce a comic porter, to be played by popular comedian Kenichi Enomoto – an actor on whose films Kurosawa had worked as an assistant director through the late 1930s.

Here's where the film's production gets complicated. Military censors objected to Kurosawa's screenplay, arguing that the comic porter and the humanised samurai got in the way of the nationalistic, pro-military message they had expect the film to promote. By the time Kurosawa made a personal visit to the censors to plead his case, he found them burning their office furniture to keep warm - his film went ahead without further interference from them. Then Hiroshima and Nagasaki were struck by atomic bombs, Japan surrendered to the USA, and Tiger's Tail was suspended mid-shoot with no one - not Kurosawa, his cast nor Toho management - quite sure what they were supposed to do next.

After a break of several weeks the film was completed, with multiple allied military groups visiting the set to observe. One of them, unbeknownst to Kurosawa at the time, was led by noted American director John Ford. When the film was completed, however, American censors objected to the film's content, arguing it was exactly the sort of pro-nationalist, military picture that the Japanese censors claimed it wasn't. Too American for the Japanese, and too Japanese for the Americans, Tiger's Tail was shelved indefinitely. When the USA occupying forces relaxed their hold on Japanese pop culture, the film was released in cinemas in 1952 - seven years after it was made. So if you watch Kurosawa's films in release order, Tiger's Tail slots in just after Rashomon. In production order, however, it's right here - and that's certainly the context in which it should be viewed since it's Kurosawa's first samurai picture.

There is a tremendous frission to the film's storyline in the context of World War II. Yoshitsune, a famed military general, has just lost a war with his brother and is fleeing for his life. He and a retinue of seven samurai (the coincidence did not escape me) attempt to make a dangerous border crossing disguised as monks. They are accompanied by a staggering incompetent porter, who is unaware of their deception.

No wonder the military censors hated the screenplay: it's entirely about honour in defeat, with the comedic porter acting as a sort of Greek chorus - observing and critiquing the characters behaviours as they go.

Kurosawa deviates from the original play in his depiction of a local magistrate who suspects the band of monks are not what they seem. In the play he's the villain of the piece. In the film, while he remains the primary antagonist, he is simply an honourable man doing his job. Kurosawa deliberately gives the character a lot of depth. The middle sequence of the film, in which the magistrate attempts to uncover the truth while the lead samurai Benkei does his best to obfuscate it, is a beautifully performed exchange between two very good actors - Denjiro Okochi and Susumu Fujita (star of Sanshiro Sugata).

At one point it does seem as if Benkei and his companions have been rumbled, as the disguised Yoshitsune is recognised. To make the border guards believe that Yoshitsune is simply an incompetent porter and not a feudal lord unused to carrying such heavy loads, Benkei beats him severely for his poor work practices and it’s all the comedy porter can do to leap upon Benkei to stop his attacks. It is an intriguing contradiction: the runaway samurai only survive because Benkei breaks a code of honour and strikes his master, and the only reason the magistrate believes their story to be accurate is because it is unimaginable that Benkei would ever break a code of honour and strike Yoshitsune. At the same time the comedy porter intervenes because he thinks it dishonourable to strike one’s superior, yet his interference means that he has in turn done exactly that: strike his superior. It's remarkable how much complexity and nuance Kurosawa draws from such a slight story.

This is an unexpectedly powerful film produced at a unique point in history. It struggles with severe limitations in terms of budget and scope, and without any ability to showcase strong visuals - it's clearly not as artfully shot as The Most Beautiful or the Sanshiro films - Kurosawa relies on strong characters and a perfectly expressed story. Of his first four films this is easily my favourite.

The final scene sees the resting samurai recovering from their ordeal, drinking sake and preparing to continue their journey. Benkei is inconsolable, and begs his master’s forgiveness for striking him. Yoshitsune does indeed forgive him without hesitation. Benkei sings and dances, in line with the kabuki tradition. The porter’s attempts at the same dance are clumsy at best. The real-life story that Tiger’s Tail recounts would have been very well known to Japanese audiences, and they would have known how the escape actually ended: the actual Yoshitsune was ultimately betrayed and, rather than face imprisonment and disgrace, committed suicide. This foreknowledge gives this third and final scene a melancholy air. The immediate task has been completed, but the ongoing escape will be a futile gesture. There is, for me at any rate, an overwhelming sense of defeat in this temporary glow of victory. As part of his drunken performance Benkei solemnly sings: ‘Even though the waterfall roars, even though the sun shines, we continue on without rest.’ Continue they do, and so – in the ashes of Tokyo, Hiroshima and Nagasaki – did Japan.