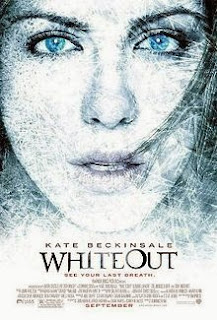 Whiteout, a 2009 film based on the Greg Rucka comic book, has all the ingredients for an exceptional film. It's a tense murder mystery. It has an arresting setting: an Antarctic research base. It has a strong and interesting female protagonist. The storyline is, on the face of it, a good one. Why, then, did it all go so horribly wrong?

This film was a notorious flop upon release, grossing Warner Bros less than $18 million dollars worldwide off a $35 million dollar budget. After director Dominic Sena completed work on the film, the studio ordered reshoots directed by Stuart Baird, and then even more reshoots undertaken by Les Wiseman. After that the film reportedly spent two years gathering dust on a shelf before the studio decided to release it. So all up, it's close to impossible to lay blame at the feet of any specific filmmaker. Perhaps it's best not to blame anyone, and simply give the film sympathetic glances and a gentle pat on the back. It tried its best. It failed. A future adrift in the back catalogue of streaming film providers clearly awaits.

Whiteout follows deputy US marshal Carrie Stetko (Kate Beckinsale) as she investigates a suspicious death in the middle of Antarctica. The more she investigates, the more complicated the crime appears. With a lethal blizzard fast approaching, and winter closing in, Carrie is on a deadline to solve the crime before she's trapped in the base for the next six months with a murderer.

There is a great story inside the film, but it's been buried beneath a lot of additional scenes and character moments that really don't need to be there. The worst is an egregious series of flashbacks showing Carrie being betrayed by her partner in Miami - the experience of which drove her to a sort of exile in Antarctica. It's the sort of scene that doesn't need to be seen: the after-effects are more dramatically interesting than the event itself, and showing the event just lends the film an unrequired level of clichés and eye-rolling stereotypes. On a similar level, an extended prologue featuring Russian airmen in the 1950s doesn't need to exist, and the film's subsequent revelations would be stronger without it.

This is pretty much the film's problem in a nutshell. Rucka's original graphic novel (illustrated by Steve Lieber) worked because it was an efficient, stripped-back thriller. There's nothing stripped-back about the film adaptation, unless you include Kate Beckinsale's unnecessary shower scene. It's been fattened with generic by-the-numbers dialogue and characters. I think part of the problem is that Hollywood is afraid of the 90 minute movie. Take a solid 10-20 minutes out of Whiteout and you'd probably have a reasonably competent thriller. Leave it in, and you've got a fairly boring movie to sit through.

There are good ideas at the film's heart, and there remain some well-staged sequences - particularly a chase through a snow storm where almost the entire screen is just a self-similar flurry of white noise, and should a character lose their grip on a rope they're pretty much guaranteed to freeze to death in minutes. I also like how the harsh environment has a cost: after one particularly unfortunate sequence Carrie loses several fingers to frostbite. On the other hand, the film's final 30 minutes struggle to maintain suspense with a mystery in which there's only one viable suspect.

The performances are perfunctory, but then there's not a huge amount that the actors have been given to do. Kate Beckinsale does a solid job, but she's let down by the material. Alex O'Laughlin isn't particularly good, and overacts terribly. Tom Skerritt, whose performances I usually like, is clearly taking it easy and collecting a pay cheque. Given the film around him, I'm not sure I blame him.

The bottom line is that Whiteout is not entirely without merit, and as such not entirely a waste of your time. So how much free time do you have?
Posted by Grant at 11:16 AM