Doctor Who: "The Day of Darkness" 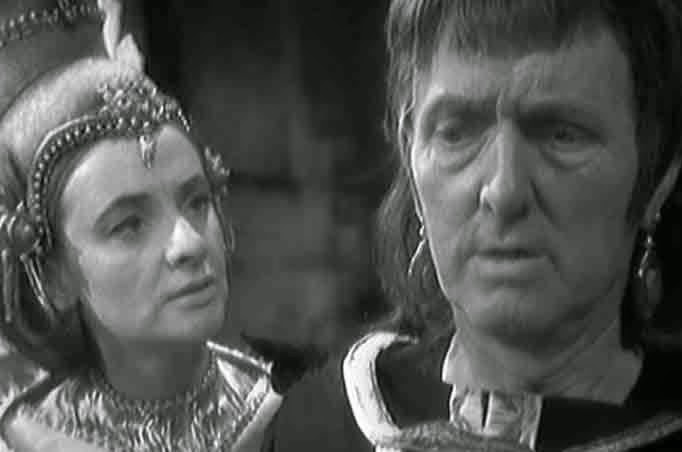 Time is running out for the Doctor and his companions to escape Aztec-era Mexico. Ian has been trapped inside a secret tunnel to Yetaxa's tomb, which is rapidly filling with water. Barbara's conflict with Tlotoxl is reaching breaking point. The solar eclipse - and Tlotoxl's planned human sacrifice - moves ever-closer.

This is such a fascinating climax, and it's a striking one in comparison to the rest of the series so far. It's striking because there isn't really a winner. Barbara doesn't get to turn the Aztecs away from human sacrifice. The Doctor falls in love but leaves his fiancee behind. Ian is forced to kill a man. The high priest of knowledge, Autloc, has his world view shattered and abandons his post, his religion and his home. Tlotoxl is the closest thing to a winner: does get to sacrifice someone, but at the same time he doesn't get to destroy Barbara as he's been planning for four episodes.

The episode begins with high stakes: Ian looks set to drown, but instead finds the secret entrance to Yetaxa's tomb that the TARDIS team desperately need. The Doctor of course doesn't know this. He thinks Ian has drowned, and the look of sheer horror on William Hartnell's face is a stunning moment for the actor.

Even when Ian and the Doctor are reunited, there's continued frustration when the leather strap Ian uses to open the tomb door from the outside snaps, delaying their escape still further - and with the eclipse approaching the clock is definitely ticking.

Ian gets framed for an anonymous assault on Autloc, as an attempt by Ixta and Tlotoxl to discredit Barbara's in Autloc's eyes. Autloc does eventually recognise the truth, but it all comes at a terrible cost. He loses his faith, and as a high priest that effectively means he's lost all purpose. He gives away his entire estate as a bribe to get Ian freed from captivity, and basically leaves town to wander the countryside. It's in moments like this that one questions whether writer John Lucarotti and producer Verity Lambert had lost sight of the fact that they were making a Saturday tea-time show for the whole family - what on Earth did the children of 1964 make of all of this?

Of course Ian can't escape to Yetaxa's tomb without passing a murderous Ixta, and their climactic fight results in Ian throwing Ixta off the top of the pyramid to his death. This goes curiously unmentioned by Ian: I'm trying to recall if he actually killed anybody in "Marco Polo". I don't think he did. I'm pretty sure this is the first time in this science teacher's life that he's killed a man, yet from his behaviour here and in the next episode he seems curiously unaffected by it all. The competitive Ian/Ixta relationship was one of this serial's highlights. I particularly liked the small details, like Ixta's inability to correctly pronounce Ian's name.

Of course the TARDIS team do ultimately escape into the tomb, with Barbara replacing all of Yetaxa's jewellery on top of her sarcophagus. The Doctor also leaves Cameca's brooch, and then - seemingly as an embarrassed after-thought - he rushes back and takes it with him. It's the best moment the character has had so far: too proud to admit to anyone that Cameca's romantic overtures had had an effect, but effected nonetheless. It's a beautiful scene.

And contrast that with the final thing we see of the Aztecs: the eclipse arriving, the sacrifice laid out on the stone, and Tlotoxl striking down with his knife. So happy. So proud. So utterly horrifying.

"The Aztecs" has been far and away the best Doctor Who serial to date. When I did a countdown of Doctor Who's all-time best stories for its 50th anniversary, I ranked "The Aztecs" fourth overall. It really is that good. As a four-part serial its quality ratio was 100 per cent. With this final episode factored in, the first series overall has enjoyed 21 good episodes out of 30. The quality ratio stands at 70 per cent.
Posted by Grant at 9:43 AM