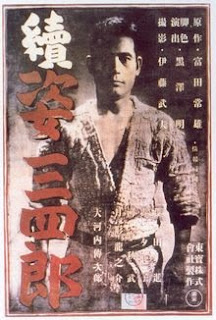 Movie goers concerned that Hollywood produces too many needless, money-hungry sequels should feel reassured that it's not just a contemporary phenomenon - nor is it an exclusively American one. After directing his second film, the 1944 propaganda picture The Most Beautiful, Akira Kurosawa was unwillingly roped into making a sequel to his first. The original Sanshiro Sugata had been a smash hit with Japanese audiences, and with morale dipping as Japan started to lose the war in the Pacific the military-led government was keen to see another rousing populist hit in the cinemas.

Sanshiro Sugata was an engaging martial arts drama set in the 1880s about a headstrong young man - the titular Sanshiro (Susumu Fujita) - becoming a judo master. Sanshiro Sugata Part II picks up the story a few years later. Sanshiro is disgusted to see a commercial fighting ring set up where an American boxer fights all manner of Japanese martial artists for money. At the same time the two brothers of Higaki - the man Sanshiro defeated at the end of the original film - have arrived in town looking for revenge.

So this is basically a film of two halves, although they develop simultaneously. The first half is pure war-time propaganda. The noble and principled Sanshiro refuses to stoop to the tawdry levels of the boxing match, no matter how hard its promoter attempts to persuade him to participate. It's only when he can no longer bear the prolonged affront to Japanese martial arts that he is forced to enter the ring and defeat the American boxer. The message is clear: America is savage and doomed to failure, while Japan is honourable and guaranteed to win. The irony of the message is that hardly anyone saw it: by the time of the film's release in May 1945 there were hardly any cinemas left standing in Japan. Japan's unconditional surrender was just over three months away.

It's difficult to find too much entertainment in propaganda, since it's primary purpose is not to entertain. Certainly the boxing plotline is the least interesting part of the film, although it must be said that the other half of the film leaves a lot to be desired.

The last time viewers saw Higaki, who dressed in European clothes and arrogantly fought against "proper" Japanese culture and behaviour, he was sliding limply down the hillside after a brutal fight against Sanshiro. I had assumed, as did I suspect viewers at the time, that he had died. The sequel changes that plotline, arguing that instead Higaki was merely defeated, but the loss to his honour has taken a terrible toll on his psychology and physical health. Now his maniacal brothers Tesshin and Genzaburo are demanding Sanshiro fight them, so they can avenge their brother's loss. It's the sort of silly sequel nonsense that's always been employed, whether in film or in literature, theatre, and so on. It's the easiest storytelling trick in the book: the hero has defeated the villain, so now he or she must fight a near-identical, more powerful villain. Had Kurosawa not pointedly refused to consider making a Part III I'm sure there would have been a super-talented fourth brother in the offing.

The climactic duel was the highlight of the first film, and the climactic duel here is again the highlight for the second. This scene trades the windswept grassy hill of the original for a snow-capped mountainside, and Kurosawa draws a lot of tension out of the scene as Tesshin and Sanshiro move ever-closer to the edge of the hill, the snow falling all around them as the storm builds.

While watching this film some clear trends have emerged in how Kurosawa is directing his films. For one thing it's clear how the best moments of character in Kurosawa's films are those expressed without dialogue: it's in the pause as a character enters a room, or the way that Sanshiro smiles at his lover when he leaves to fight his duel. For another Kurosawa definitely shoots action very well: the mountainside duel is about the best scene he's shot in his career at this point, and is still remarkably effective decades after the fact. With this film he also starts drawing on conventions from traditional Japanese theatre: the silent, mentally unhinged Genzaburo Higaki wears a shaggy black wig and carries a small branch of bamboo - both symbols from noh theatre to signify his insanity.

Altogether Sanshiro Sugata Part II is not a great film, partly because of the fairly dull propaganda scenes but also because Kurosawa clearly had little enthusiasm for it. That lack of interest in the material, not to mention what must have been increasingly difficult production circumstances, work against the film. While there's always going to be some joy in seeing a likeable movie character return, there's simply not an interesting enough story to be told. Kurosawa only made one more sequel in his entire career (Sanjuro). From here onwards, his focus on original storytelling was paramount.