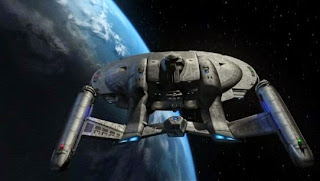 Dr Phlox is kidnapped by aliens in San Francisco. While the Enterprise crew attempt to work out where he has been taken, Phlox finds himself unwillingly forced to help a Klingon scientist find a cure to a virus that is decimating his species.

Given Season 4's ridiculous propensity to indulge in all manner of unnecessary continuity references, I suppose it was only a matter of time before the series tackled Klingon foreheads. In the original Star Trek the Klingons were basically humans with orange-hued make-up and thick black eyebrows. For Star Trek: The Motion Picture, however, they were re-envisaged with thick cranial ridges that remained throughout all of their remaining Star Trek appearances. Some fans - evidently the ones with too much time on their hands - always wanted to know why this change occurred, demanding some in-universe reason to cover the fact that essentially 1980s Star Trek had a lot more money than 1960s Star Trek and could finally do decent prosthetic make-up. By Deep Space Nine they were even making jokes about it, with Worf noting "it is not something we discuss with outsiders". It was a great joke, basically telling the audience "Yes, we know. Stop fussing about it."

Well they clearly fussed about it enough, because here we are with an explanation for why 23rd century Klingons have smooth foreheads and 22nd and 24th century Klingons have bumpy heads. It's the answer for which literally no one worth a damn was waiting, and in true Season 4 style it's as complicated as it could possibly be. In short: after seeing the entire crew of a Bird of Prey massacred by two genetically augmented humans earlier in the season, the Klingon Empire used augmented human DNA sourced from that ship in an attempt to create genetically superior Klingons. This experiment went horribly wrong, and the augment DNA got into an alien flu from which one of the test subjects had been suffering, and this augmented super-flu is now killing off all of the Klingons. One of the side-effects of the augmented human DNA is that the Klingon's cranial ridges dissolve, transforming them into the human-like Klingons seen in the original Star Trek.

So, die-hard continuity-obsessives, happy now? I actually wish I had been paying closer attention to this series back in 2005 so that when the fans complained about Paramount's axing of the series and demanded to know why I could have pointed to "Affliction" and shouted: "This; because of shit like this." It takes a particularly sad obsession with back story and continuity to tie the question of Klingon head-bumps into Khan and his genetically-modified army of psychopaths. Khan indeed gets name-checked. So does Arik Soong, ancestor of Commander Data's creator Noonien Soong. The episode even re-introduces Section 31, Starfleet's dodgy-as-hell secret intelligence service, because if there's one thing this episode needed more of it was additional eggs in the pudding.

Michael Grossman directs the episode with a lot of hand-held camera work. When done well, this kind of photography can give an episode a tense, in-your-face feel. When not done so well it can just make things appear needlessly cheap. There's a key early scene on a San Francisco street where the episode looks about as cheap as Star Trek has ever looked. I know Enterprise suffered a pretty severe budget cut for its final season, but I think this is the cheapest the franchise has looked in many years.

Moment to moment there are some great scenes and bits of character development, whether it's Tucker adjusting to life on the Columbia, or T'Pol initiating a mind-meld for the first time, or Phlox's conversations with the Klingon scientist Antaak (Trek veteran John Schuck). It's all serving a tedious premise though, so it's difficult to enjoy it too much. There's also a highly distracting cameo from Family Guy creator Seth McFarlane, which almost escapes attention until he opens his mouth and sounds exactly like his cartoon creators.

As you might have surmised, I really hated this episode. It's wasting everybody's time - the cast's, the crew's, the viewing audience - all to answer a question that nobody sensible was ever asking. What's more, the answer it gives is ridiculous and stupid. That leaves Season 4 with eight good episodes out of 15, and a quality ratio that's dropped down to 53 per cent.
Posted by Grant at 9:55 AM