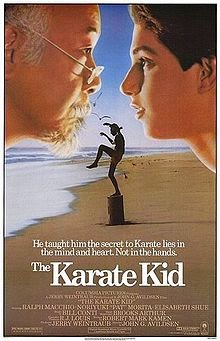 The Karate Kid is one of the touchstones of 1980s American pop culture, as significant to the cultural narrative as Ghostbusters, E.T. or The Breakfast Club. It's a film whose most iconic elements are now better known than the film itself, and which continues to get referenced and name-checked in all manner of parodies and popular comedies.

The plot, in case you've been living in a cave: teenager Daniel LaRusso (Ralph Macchio) moves with his mother from New Jersey to California's San Fernando Valley. He is soon targeted by high school bullies, all of whom have learned karate at a local "cobra kai" dojo. When he's targeted for a particularly brutal beating, Daniel is rescued and defended by his apartment block's maintenance supervisor - the Japanese Mr Miyagi (Pat Morita). Miyagi agrees to personally teach Daniel karate so that he can defeat the bullies in the local karate tournament.

The most immediate impression gained from The Karate Kid is how much it reflects the boxing drama Rocky. They share an underdog protagonist who basically gets one unlikely chance to prove themselves. They're helped in their journey by an old man, who trains and advises them - and gains a new lease on life as a result. They both end in the ring, the overjoyed champion triumphant that he was finally able to prove himself. And, unsurprisingly given all of the above, they share a director in John G. Avildsen.

Now obviously Rocky and The Karate Kid do not share the same story, but there are so many ways in which Avildsen has used techniques and story beats from one to develop the other. He has even used the same composer, Bill Conti, to write the musical score. They appeal to different audiences - one is an adult drama, the other a summer movie for teenagers - but they're cut from the same branch. As a lifelong fan of Rocky the similarities are a little distracting.

Ralph Macchio is an appealing enough lead actor, although Daniel is often written in a slightly unlikeable fashion. It's actually quite refreshing to see a protagonist with faults. Elizabeth Shue demonstrates a great screen presence in this, her debut role, and it's no surprise that her career kicked off from this. Daniel's two nemeses, the cobra kai teacher John Kreese and the school bully Johnny Lawrence, are both badly written and weakly performed. They reek of the 1980s, when audiences didn't seem to care quite so much for depth or characterisation.

The standout, however, is Pat Morita as Keisuke Miyagi. Intelligent, funny, and unassuming, the character manages to escape being a stereotypical 'mystical wise Asian' thanks to a well-developed background and an outstanding performance by Morita. The background includes the fact that Miyagi fought for the Americans in World War II, and that his pregnant wife died in labour inside an American internment camp. The film does not dwell on the politics of the tragedy, but the fact that it's noted at all is rather thought-provoking. Morita's performance is perfectly balanced, with plenty of depth inserted in looks and moments of silence. It's no surprise that it gained him an Oscar nomination.

What we ultimately have here is a rather derivative film that's been enhanced with just enough originality and a few standout performances to make it well worth the time. It's also aging rather gracefully; much of the film's soundtrack and setting dates it irrevocably, but it's well told and doesn't take too long in that telling. It was followed by three sequels and a slightly nonsensical remake starring Jackie Chan.
Posted by Grant at 9:06 AM