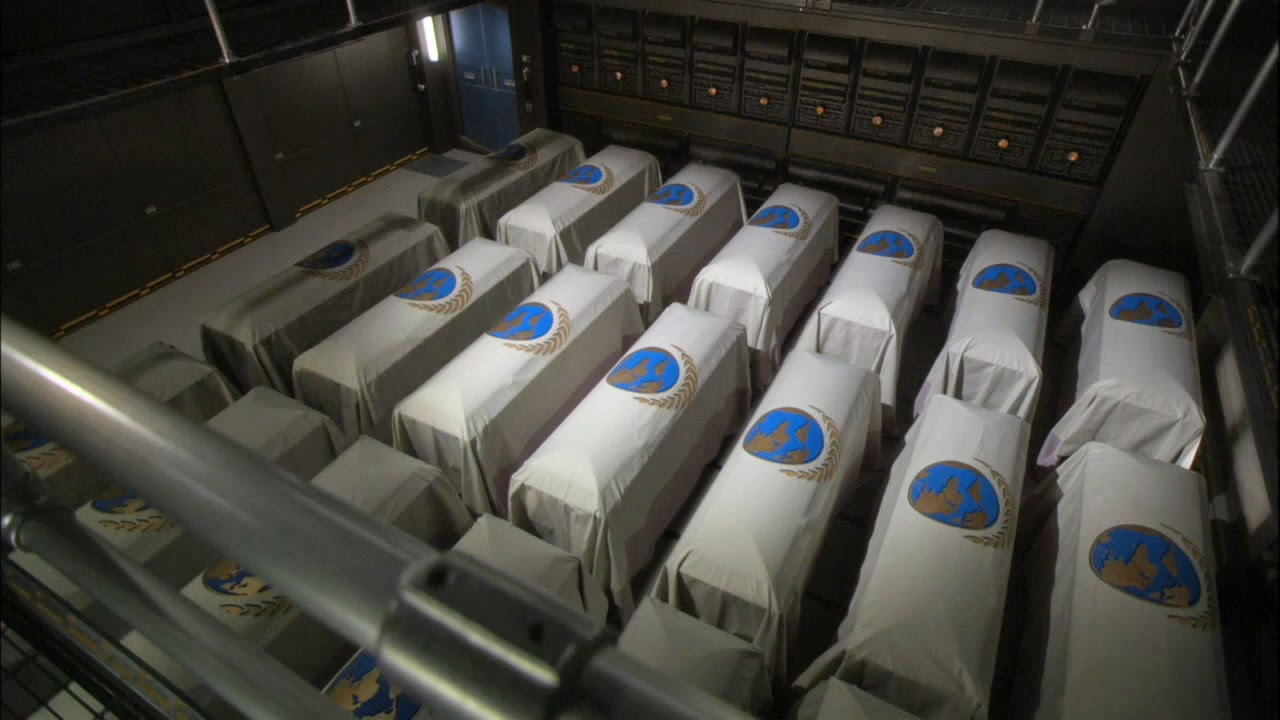 An explosion rips through the Earth embassy on Vulcan, killing dozens of people including Archer's close friend Admiral Forrest. While Trip and Phlox lead the investigation on the Enterprise, Archer (Scott Bakula) and T'Pol (Jolene Blalock) head out into the Vulcan desert to apprehend the religious cult suspected of undertaking the attack.

This season seems to be all about answering questions the audience probably was never asking. The season premiere was an answer to 'can we see more of that interminable temporal cold war?'. The subsequent three-parter was an answer to 'what was Noonien Soong like, and can we see more of Khan's people?'. This episode, which kicks off a second three-part story, appears to be answering the question 'why are the Vulcans in Enterprise such assholes?'. I assumed the answer was 'bad writing', but apparently it's something more than that.

As with those earlier Season 4 stories, "The Forge" is a maze of continuity references. It follows up on plenty of elements from Enterprise itself - Ambassador Soval, the death of Forrest, T'Pol's husband, and of course the relationship between Earth and Vulcan. It's been a pretty strained relationship since the series pilot, and it always struck me as rather unbelievable given the way Vulcans have behaved in all of the other Star Trek productions. Obviously some others had the same problem, because this really does seem to be an explanation as to why the two different behaviours don't mesh together.

The continuity references extend far beyond Enterprise, however, with the inclusion of T'Pau - who will, in her future, appear in the original Star Trek - and the live-action debut of the Sehlat, a sort of large Vulcan cat that previously appeared in Star Trek: The Animated Series. I'm all for revisiting your past, but when a series starts name-checking its 40 year-old animated spin-off it's probably one revisitation too many. Really keen-eared viewers will recall several of the questions posed to Archer by a suspicious Vulcan as coming from Spock's computer test in Star Trek IV.

Things seem to be taken one extra step too far when a dying Vulcan, fatally struck in a lightning storm, places his hand on Archer's face and transfers his 'katra' - a Vulcan soul - into Archer's mind. It's what Spock did to McCoy back in Star Trek II, and by repeating it here it feels like that film's events are somehow diminished. It's a constant problem with Enterprise: every time they revisit an element from an earlier series it retro-actively dimishes the impact of that particular episode.

There is a lot to enjoy here. In particular it's great to see Ambassador Soval (Gary Graham) get fleshed out and rounded off, and given a prominent place within the storyline. He's always been rather badly under-written in the past, and it must have been a relief for Graham to finally get something interesting to do.

Altogether the strengths in the script and the performances don't outweigh the near-catastrophic weight of all the continuity references. It's entertaining to an extent, but also exhausting. I don't think this one quite manages to get a thumbs-up from me. That leaves Season 4 with four good episodes out of seven, and a quality ratio of 57 per cent.
Posted by Grant at 3:05 PM