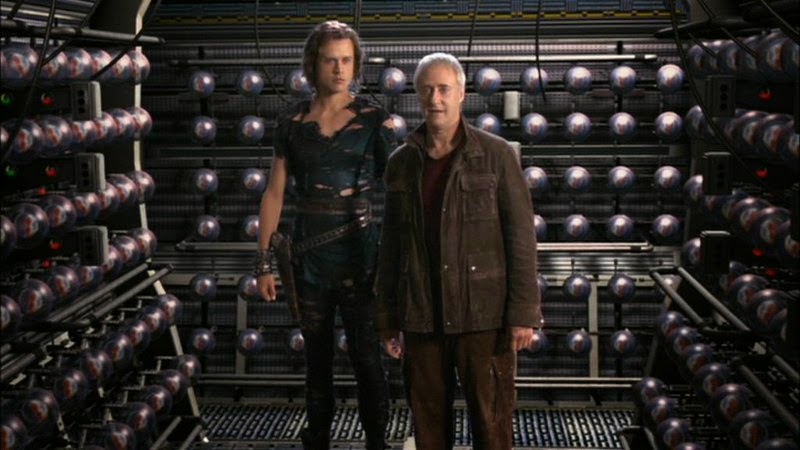 Dr Arik Soong (Brent Spiner) leads the augments to Cold Station 12, the highly secure asteroid facility where Earth and Denobula keep their most dangerous pathogens. It also contains 1,800 augment embryos that have been kept on ice since the Eugenics Wars. Captain Archer (Scott Bakula) and the Enterprise remain in hot pursuit.

"Cold Station 12" feels like a much more focused episode than "Borderland". The latter seemed to get a little derailed halfway through with an Orion slave traders storyline. The focus of this episode is entirely on the augments, as they take control of Cold Station 12 and begin torturing and murdering the scientists there to get what they want. It's a highly dramatic episode, with some great action sequences, the debut of an oft-mentioned character and a strong moral challenge for Arik Soong.

Soong had been remarkably idealistic about his augments. He wants them to thrive, and prove to the people of Earth that there's nothing to be feared from genetic modification. Instead he slowly realises they're violent and murderous psychopaths - and of course by the time he fully accepts the horror of their true nature it's almost certainly too late to stop them. With this episode the de-facto augment leader Malik (Alec Newman) develops into a readily identifiable but sadly superficial villain. Any ambiguity as to the characters' motivations are well gone from here, leaving behind a straightforward action episode without any real depth or nuance to it. Thankfully it's very entertaining action, but it does still feel as if a trick has been missed. Star Trek used to be more thoughtful than this.

It's nice to see the debut of Dr Jeremy Lucas (Richard Riehle). He is the human doctor who engaged in a medical exchange that enabled Dr Phlox (John Billingsley) to become the Enterprise's chief medical officer. We've heard mention of him for more than three seasons, and we've seen Phlox dictate letters to him on more than one occasion. Actually seeing the character, and played by the immediately recognisable Riehle at that (seriously - the man is in everything), is one of the episode's nicest touches.

The episode ends on another cliffhanger, with Archer charging up a maintenance ladder to stop the facility from unloading all of its pathogens at once. It does feel a little too much. I think what story they have here could have easily been wrapped up in two episodes. Hell, take out the mucking about with Orion slavers and it could have been done in one. On its own merits this is broadly entertaining to watch, but it does feel a little superficial and a little padded at the same time.

This leaves us with four enjoyable episodes out of five, however, and a quality ratio of 80 per cent. Season 4 might not be doing too much that's particularly exciting, but it's not tripping over its own feet too much either.
Posted by Grant at 8:56 AM