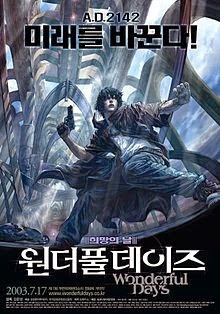 By the mid-22nd century, environmental pollution has all but wiped humanity from the face of the Earth. Now two communities remains: the rich, powerful elites of the city Ecoban and the "diggers" outside, who are exploited to mine for the resources needed to keep Ecoban's high-technology paradise working. Childhood friends Shua and Jay meet one another for the first time in a decade - only this time she works for Ecoban security, and he leads a growing revolution agains Ecoban's control.

Wonderful Days, released in some markets as Sky Blue, is a 2003 animated feature film from South Korea. It tells a fairly familiar science fiction story, and certainly keen fans of anime are unlikely to see any kind of story here they haven't already seen before - although it is well-expressed. Where animation fans are likely to find more worth is in the astounding manner in which the film has been animation - a process that involved traditional cel animation, computer-generated graphics and physical model work.

It really isn't worth discussing the story that much, other than to say that it's a very serious and comparatively humourless science fiction drama in the vein of Mamoru Oshii. It does its job, but it can't be ignored that it all feels a little reheated and ordinary.

Visually the film is a marvel. The combination of animation style should be jarring, but it has been undertaken with such deftness that it all slips in together. The use of shadow in particular is remarable, and its critical to giving the 2D cel animated characters a visual depth that matches their painterly computer-generated surroundings. The design work is brilliant, as is Won Il's musical score. This is a film that is absolutely appreciated in its execution, rather than the story at its heart.

Director Kim Moon-saeng is best known as a director of television commercials; this is, as far as I'm aware, his only feature film. It's a pity: based on the jaw-dropping visuals here, I'd love to see him direct a few more.
Posted by Grant at 4:59 PM