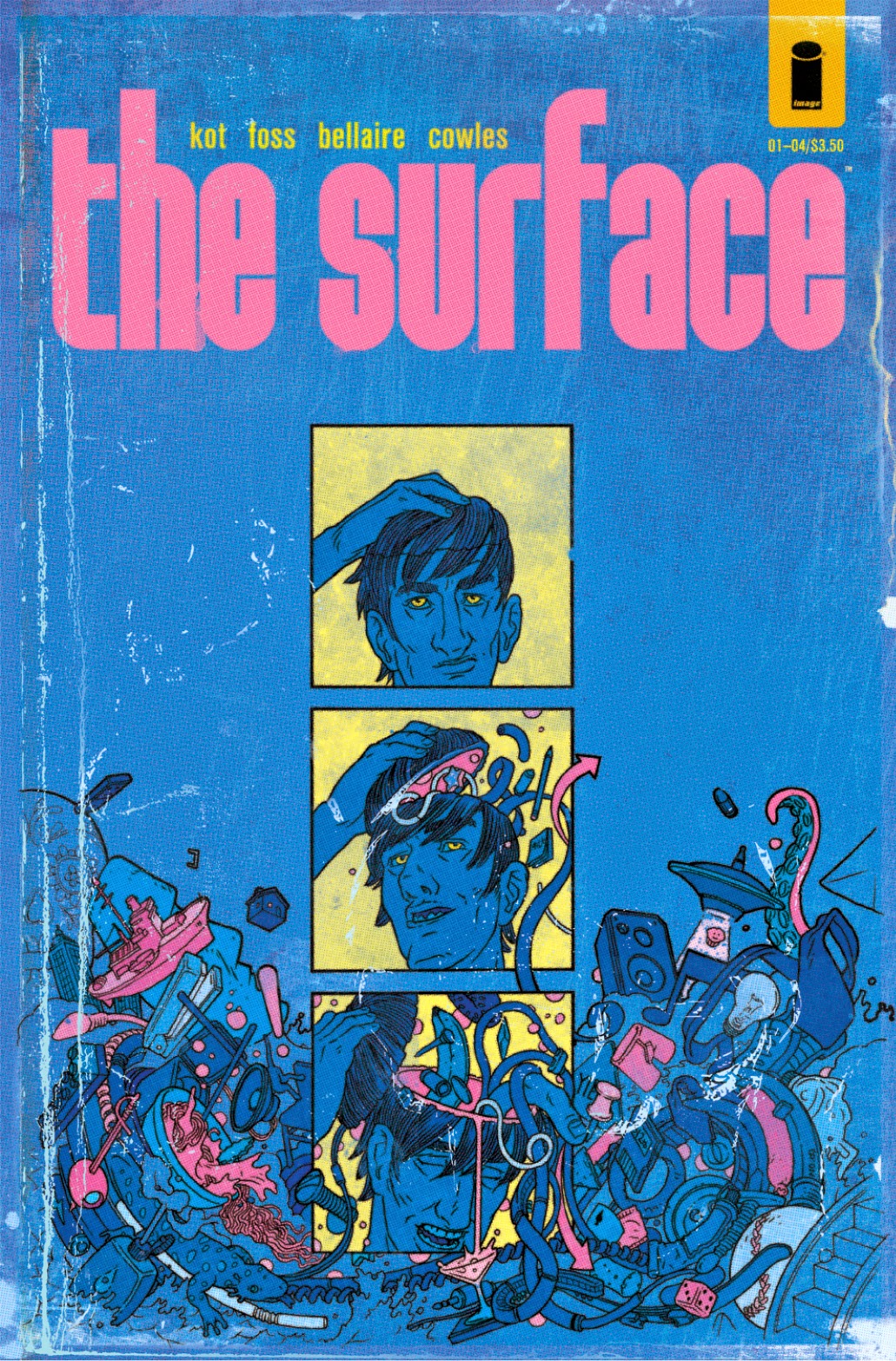 Ales Kot is rapidly establishing himself as a potential heir-apparent to Grant Morrison. He often covers very similar territory: densely researched stories of science fiction, sex, drugs, violence, and inter-dimensional strangeness. His 2013 miniseries Change was a remarkably odd four-parter that inspired and frustrated in equal measure. Since then he's been doing both original work (Zero) and work-for-hire (Secret Avengers, Suicide Squad). The Surface is his latest work, apparently the second part of a 'thematic trilogy' that began with Change. To my mind it's a much more accomplished and coherent work, and demonstrates a rapidly growing talent at work.

The book is set in a future Tanzania, where Middle Eastern and Chinese commercial interests have transformed the country into a high-tech international hub. Mark, the President's son, travels beyond the city limits with his two lovers Gomez and Nasia in an attempt to find layers of reality that exist beneath the surface (there's the title, I guess) of their own.

It's a very dense book that openly references many of its inspirations (Burroughs, Ellis and Robertson's Transmetropolitan), as well as deliberately pokes fun at itself. It's a maze of odd character moments, jumps from comic narrative to written interviews and back, and a visual style that seems more inspired by French science fiction comic books than anything else. It's odd, lively, a little pretentious, but overall a fantastic first issue - and a series well worth following. (5/5)

Under the cut: reviews of Action Comics, Batman Eternal, Detective Comics, FBP: Federal Bureau of Physics, Howard the Duck, Miles Morales: The Ultimate Spider-Man, Silver Surfer and Southern Cross. Thor and Ms Marvel I will endeavour to review later, once I've actually grabbed hold of copies of each.

Superman finds himself thrown into Bizarroworld for a very strange, ridiculously silly one-shot. I've never liked Bizarro: he's the sort of character that appeals to young children I suppose, with his manner of saying the opposite of what he means, and generally looking stupid and saying stupid things. This issue, while well illustrated, doesn't really bring anything else to the table. It's essentially filler: DC is about to go on a two-month break for their Convergence crossover, the last story arc wrapped up in February, so for March we get this. Easily skippable. (2/5)

It's the attack of the Pennyworths, as Julia and Alfred team up to take Hush down. Meanwhile Gotham continues to fall apart, as Batman's various sidekicks do their best to stop the city's various super-villains from running riot through the city. This issue is basically part two of what I assume will be one extended climax. The action's decent, the pace is fast, and the lack of overall plot progression is forgiveable given the weekly schedule. Hopefully there's a little more narrative meat to next week's issue. Great Cliff Chiang cover too. (3/5)

Buccellato does a rather clever thing here by writing a tie-in to Batman's "Endgame" story arc while simultaneously following up on the recently completed "Anarky" arc in Detective Comics. The result is a comic that gives readers of both titles a way in. It's really solid stuff as well: you're not going to lose out on understanding either arc by skipping this, but it fills both storylines out nicely and tells an entertaining story at the same time. For this kind of opportunistic cash-in it's pretty much exactly what you'd want. (4/5)

Cicero undertakes some last minute, potentially critical, research before the D-nauts make their first trip outside of our own reality. There's a wonderfully apocalyptic tone through this issue, as the various characters weigh up the genuine possibility that the world is going to end. Once again this is fantastic stuff, and it's a shame hardly anybody is left to read it. This book has taken almost two years to get to this point, and shed most of its readers along the way. Anyone who sampled early issues and abandoned it should really consider jumping back onboard. I also like how this issue's cover reflects that of issue one. (4/5)

Steve Gerber and Val Mayerik's Howard the Duck was one of Marvel's most inventive and clever comic books back in the 1970s, and for a while got so popular that George Lucas even produced a feature film adaptation. With Marvel finding a lot of success with its more alternative takes on their standard superhero material in Hawkeye, Ms Marvel, She-Hulk and the like, I suppose it makes sense for them to take the opportunity to bring the character back. This first issue by Zdarsky and Quinones is smartly written and genuinely funny, and has stunning artwork to boot, and features at least one moment that made me laugh out loud, but despite all of that there's something here that really didn't grab me. For those desperate to read new adventures of a private detective anthropomorphic duck in the Marvel Universe, this is absolutely the book for you. I'm just not sure it's the book for me. (3/5)

Miles has been kidnapped by Hydra, because it turns out his girlfriend Kate has been a part of that organisation all along. Meanwhile Black Widow tracks down the two Spider-Man inspired thieves and attempts to take them down. To Bendis' credit, more happens in this issue than has happened in a while. At the same time, this is the penultimate issue of this comic book before yet another relaunch/renumbering later this year. There's a hell of a lot to wrap up, making me concerned that (a) it won't be, or (b) it will be wrapped up in the most perfunctory and unsatisfying manner possible. When Ultimate Spider-Man relaunched with Miles Morales as the lead I thought it was one of the best comics on the market: it's fallen a pretty long way since then, and slowed to the most intolerable crawl. Plus the cover to this issue pretty much spoils the final page. Nice work, Marvel. (2/5)

It's the Surfer's last stand against Galactus, to stop his former master from eating a planet populated entirely by refugees from all of the other planets Galactus has already eaten. It's a stunning finale, and one that's much more serious than your average Silver Surfer issue. It also kicks off a whole new direction for the title that I assume will go for at least the next few months. I have really enjoyed what Slott and Allred have done with this title: it really is one of Marvel's very best. (5/5)

Alex Braith steps onboard a tanker ship on its way to the Saturnian moon of Titan. Everyone else is going there to work in the moon's refineries. Alex is going there to collect her sister's dead body. This is a stunning first issue of what looks set to be a great blend of science fiction and mystery. It already features interesting characters, engaging dialogue and evocative world-building. Andy Belanger's excellent artwork also includes some great panel composition, and Lee Loughridge's colours are very strong as well. All up it's just a fantastic package, further cementing Becky Cloonan's growing reputation as a writer while providing Image with yet another top-of-the-line science fiction book. It really is becoming their raison d'etre. (5/5)

Winner of the Week: The Surface and Southern Cross are both remarkable debuts.
Loser of the Week: Both Action Comics and Miles Morales felt a little like wastes of my time, but the former more so than the latter.
Posted by Grant at 5:01 PM