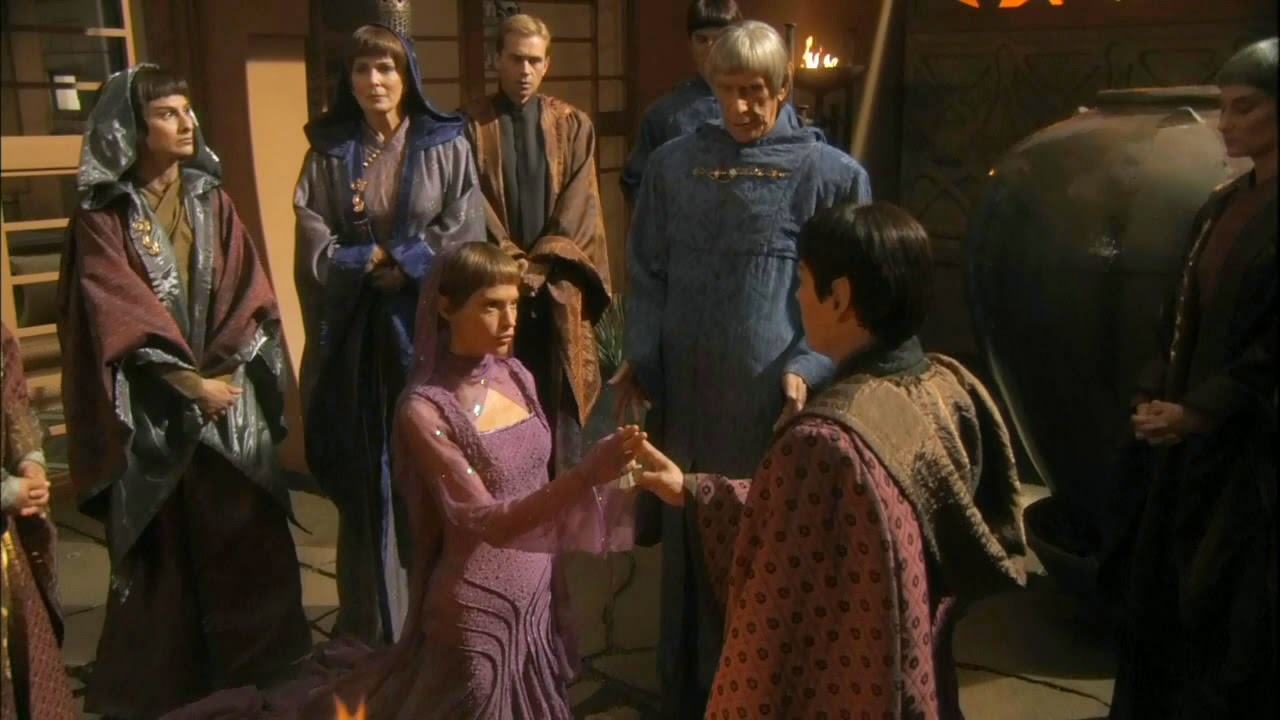 While the Enterprise is repaired, and its crew are celebrated around the world for saving the Earth, Captain Archer (Scott Bakula) goes through a crisis of confidence when it comes to his future as a Starfleet captain. Dr Phlox discovers that not all humans are ready to re-embrace contact with aliens. Tucket accompanies T'Pol to her home on Vulcan, and gets an unexpected - and unpleasant surprise.

"Home" really reminds me of "Family", the second episode of Star Trek: The Next Generation's fourth season. Both episodes come from a similar point of origin: terrible things have happened, and the series needs to spend an hour resetting the situation and giving the characters space to recover from their experiences. In the case of "Family", it was all about Jean-Luc Picard recovering from being aggressively violated by the Borg. In the case of "Home" it's about all of Jonathan Archer's morally dubious choices in Season 3 piling down onto him at once.

I'm glad to see the series handle this part of Archer's character arc, since some of the decisions he made over the course of Season 3 were really unpleasant and immoral. He's been pushed in directions that no Star Trek captain has had to negotiate since Sisko lied to the Romulans to win a war in Deep Space Nine. He has tortured prisoners, let people die rather than sacrifice his mission, and stolen technology from defenceless aliens. One choice in particular, to let a shipful of violent, insane Vulcans die rather than attempt to cure them or bring them home, is the subject of a fairly harsh interrogation at Archer's debriefing.

The episode cleverly contrasts Archer with Erika Hernandez (Ada Maris), an ex-girlfriend and former first officer now promoted to captain of the USS Columbia. She's eager to head out and explore the galaxy. He's warning her to assign marines onboard and fit her vessel with as many phaser cannons as it can manage. She's optimistic, hopeful and enthused - in short, she's everything he was four years ago when "Broken Bow" launched Enterprise in the first place. Their interactions and rekindled romance form one half of the episode, and it's a bloody good half at that.

There is also a small subplot in which Phlox encounters some racist humans in a bar, but the other main thread of this episode follows T'Pol and Tucker's trip to Vulcan. Their relationship has staggered along in a very uncertain manner for the past year, and when T'Pol's Vulcan fiancee arrives at her home to demand she marry him, we're thrown into a classic kind of love triangle. Should T'Pol side with tradition, and familial obligation, and enter a pre-arranged marriage, or should she abandon those expectations and finally commit to the man she really loves. It's actually a rather jaw-dropping surprise to see her pick tradition over love, marry her fiancee Koss, and leave Tucker somewhat bereft. At her wedding she pauses at the last moment and kisses Tucker tenderly on the cheek: it's absolutely heart-breaking.

I think that's the greatest achievement of "Home": it doesn't give the characters what they want. T'Pol loves Tucker, but chooses to marry another man to save her mother's reputation. Tucker loves T'Pol, but never confesses it to her out of fear it will complicate her life further. Phlox never challenges the racists, and chooses to remain alone onboard the Enterprise. For Archer there is some amount of closure - he finally reaches an understanding with Ambassador Soval (Gary Graham), and seems prepared to re-assume his command, but there's no denying he's a changed man. The emotional scars are clearly going to linger.

This is a great hour of television, and one of Enterprise's best episodes. It leaves Season 4 with two good episodes out of three thus far, and a quality ratio of 67 per cent.
Posted by Grant at 9:19 AM