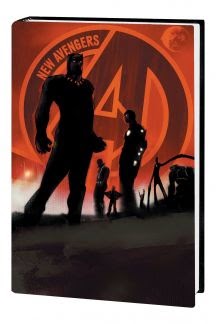 Marvel have fallen into such a habit of renumbering and relaunching their ongoing comic titles that it's difficult to know where to start reading. Everything Dies seemed to be a decent place to begin, since it boasts Marvel's most recent trade dress and is clearly labelled Volume 1. Sadly it doesn't read like the first six issues of anything. Instead the reader is dropped into a maze of pre-established character relationships, references to events they haven't necessarily read, and an ending that doesn't climax so much as abruptly stop - presumably leaving the reader to blindly buy Volume 2 in the hope of discovering what the hell is going on.

So it turns out there is a secret group of superheroes - Black Panther, Iron Man, Dr Strange, Black Bolt, Mr Fantastic, Sub-Mariner and the Beast - who meet up from time to time to discuss how to keep the world safe, and to make the big decisions that the broader superhero community might not be trusted to make. They have a new problem, which involves parallel universes somehow colliding with catastrophic results. To save the Earth, they may have to blow up parallel versions of it - including murdering anyone living on that alternate planet.

It's a big cosmic sort of dilemma, and one that is always rather dangerous to put in front of ongoing superhero characters. Marvel prides itself on its long-running "everything counts" style of continuity, so turning several of its most popular characters into mass murderers is a fairly risky proposition. It might make for a good story now, but may cripple the characters for the future. I had similar problems with Marvel's enormously popular miniseries Civil War, which turned Iron Man into a fairly unpleasant person just to satisfy the requirements of its hero-versus-hero narrative.

It's also clearly a dilemma too big for six issues, since I finished this first volume not really any the wiser about what's going on or what the heroes have achieved. Older Marvel comics used to be littered with little explanations and asides from the editors. They might have been a bit cheesy, but at least they allowed anybody picking up an issue cold to follow what's going on. Modern Marvel comics don't have that luxury.

It's disappointing because I'm generally an enormous fan of Jonathan Hickman's comic book writing; he seems to have phoned this one in to a large extent. It's also troubling in this day and age to see a superhero team book with not one woman on the team. Are the women of Marvel simply not smart or powerful enough to sit with the so-called "Illuminati"? Steve Epting and Rick Magyar's artwork is strong, but it simply doesn't have a satisfying story to service.

Now there is every chance that this volume is followed by a brilliant expanding storyline that is tremendously satisfying, but if Hickman can't hook me in properly from the beginning then there's no point in whatever happens later. This is one Marvel collected edition best left alone.
Posted by Grant at 9:31 AM