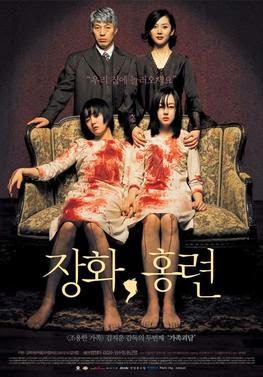 A family arrives in an isolated country house: a father, stepmother and two teenage sisters. From the outset it is clear that something is wrong. The father is having difficulty talking to his daughters, the stepmother appears to resent their not immediately accepting her in place of their mother, and the sisters themselves seem withdrawn and traumatised. As their backstory is gradually filled in, and the reasons for each of their behaviours become clear, tensions in the household increase to breaking point.

A Tale of Two Sisters is a South Korean horror film written and directed by Kim Jee-woon (The Good the Bad and the Weird, I Saw the Devil). It loosely adapts an old Korean folk story, "Red Flower, Red Lotus", and indeed that's the direct translation of its Korean title. This isn't a surprise from watching the film: between the woods, the creepy house, the evil stepmother and the two fearful sisters it has all of the trappings of a fairy tale from any number of nations or cultures.

It is also, by the way, utterly superb. This is one of my favourite Korean films: perfectly paced with a constant rising tension, and beautifully shot and edited.

The film's story (and it's really not possible to discuss the story without completely spoiling it) couldn't work if the relationship between the two sisters wasn't convincing. Thankfully Kim has cast his film extraordinarily well, and the two actors he selected do an outstanding job. There's the more wilful and argumentative Su-Mi, played by Im Soo-jung, and the more withdrawn and awkward Su-Yeon, played by Moon Geun-young. They perform their roles with such a wonderful closeness and familiarity that it makes events later in the film particularly heartbreaking.

Even more impressive is Yum Jung-ah as the sisters' petty and antagonistic stepmother Eun-joo. Yum has a particularly complex role to perform, and she pulls it off brilliantly. Kim Kap-soo plays the father competently enough, but he's saddled with the film's one under-written role which doesn't leave him with an awful lot to actually do.

Visually the film is shot with astonishing precision: not a shot out of place, not a single edit that's sloppy or poorly timed. Kim progressively ratchets up the tension, beginning with what seems like a tense family drama before pushing it further and further into psychological thriller and then supernatural horror. The film's story contains many surprises, and more than a few incidents of quite startling imagery. One of the film's more impressive surprises is that it doesn't quite extend itself to the level of melodrama one normally sees in Korean cinema. It's a cinema with a reputation for being rather over the top, emotionally speaking, so it's always interesting to see a director exercise some restraint. It makes the film even stronger, dramatically speaking.

Kim Jee-woon subsequently made a number of popular and successful Korean films, including The Good the Bad and the Weird and I Saw the Devil, as well as dabbling in Hollywood with the Arnold Schwarzenegger comedy The Last Stand. From what I've seen A Tale of Two Sisters remains his finest work: tense, imaginative, horrifying, and sad. It's so very, very sad.
Posted by Grant at 11:07 PM