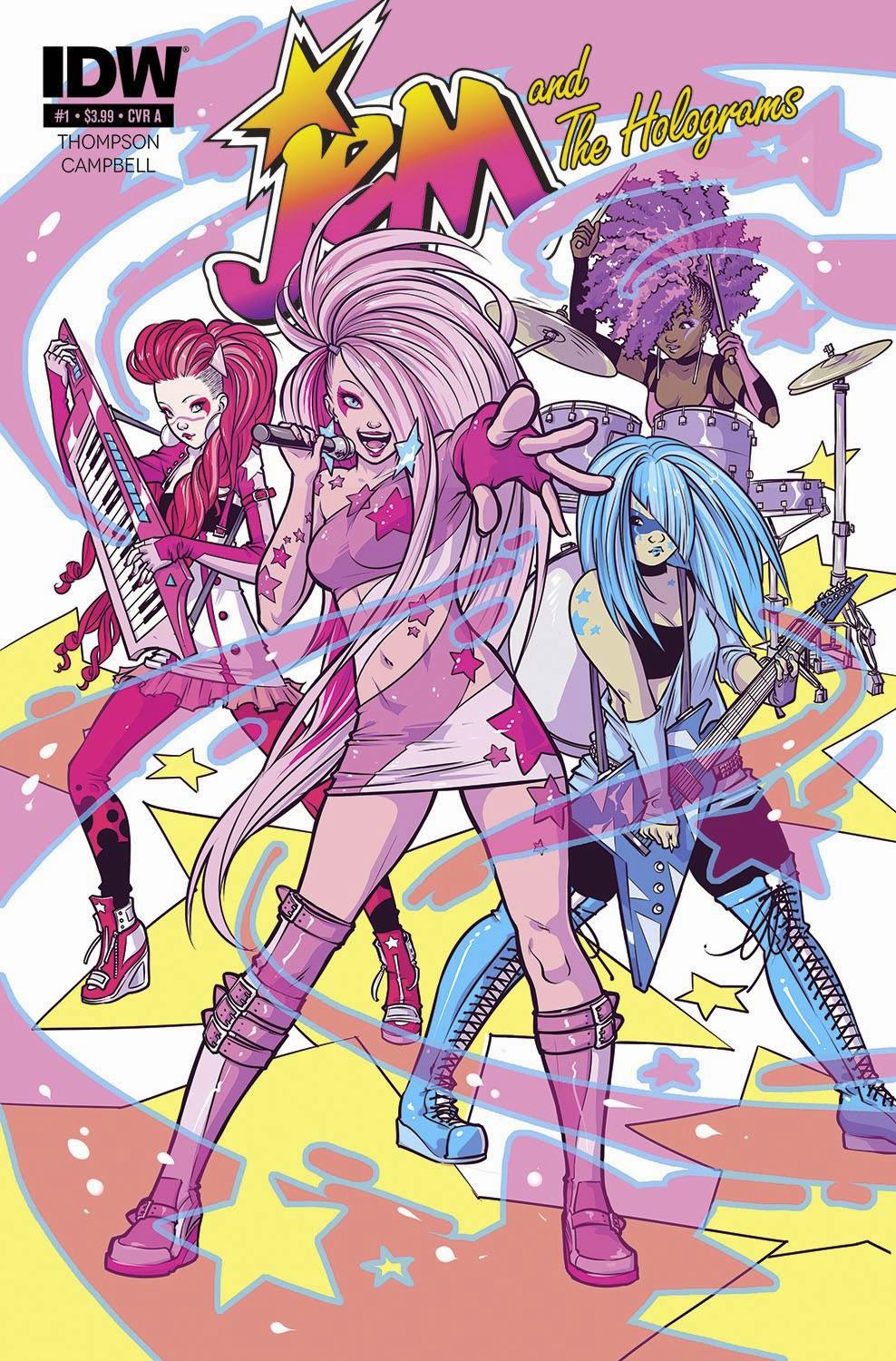 I am a child of the 1980s, which is to say I was born in the late 1970s and grew up watching 1980s cartoons. It explains my regular purchase of DC's He-Man, and it also explains my irrational and ever-so-slightly embarrassing excitement that IDW have launched a new Jem and the Holograms comic.


I have to be honest: I haven't watched a single episode of Jem since the 1980s. As a child I remember it being one of the better cartoons on the TV, and it strikes me as a particularly cool concept to revisit as a comic book. What could be cooler than action-adventure starring a pop group?

The key here is reinvention. Writer Kelly Thompson and artist Sophie Campbell haven't simply reproduced the design and style of the cartoon on the page. They've taken the basic concept and the characters and developed them for a contemporary audience. The story is reasonably good, although not a great deal happens in this first issue. The art and design work, however, is fantastic. There's diversity in race and body shape, cool costuming and outrageous hair. It's hard to say whether or not this book will have narrative legs, but visually it's a brilliant start. If, like me, you have fond memories of the original cartoon, or if you're looking for an entertaining comic starring a group of women, this could be the new comic for you. (4/5)

With many thanks to IDW Publishing, I'm now receiving review copies of their titles each week. As a result I'm breaking The Pull List into multiple posts for the future. This is for two reasons: firstly, I now have access to a lot more books that I can review each week and I don't want to stack them all into one massively long post. Secondly, it means I can get the IDW reviews out on their day of release, along with anything I manage to read on the day I buy it, and you can read some of these short reviews a bit more promptly.

The "Maelstrom" arc concludes with Aquaman and his mother finally confronting each other face to face, and a giant lava elemental threatening to kill everybody. It's an action-packed conclusion that's pretty typical of where Aquaman is these days, creatively speaking: Atlantis-centric superheroic fantasy, with giant monsters, undersea kingdoms, shifting loyalties and courtly intrigue. It's a solid, enjoyable and consistently enjoyable comic book, and there's always a place on the shelf for that. (3/5)

In the aftermath of the Battle of Yavin, Vader is disgraced. His command has been rescinded by his Emperor, and he is left taking orders from the officious General Tagge. At the same time, he is running his own illegal agenda: finding the mysterious pilot whose Force powers enabled them to destroy the Death Star. This issue is all about securing the team he needs to help him: in this case an archaeology named Aphra, and two homicidal prototype droids. It's an odd set-up, and really stands as quite an unusual story for Darth Vader, but his character is believable and consistent with his iconic on-screen persona. It also manages to echo Vader's prequel-era life as Anakin Skywalker as well, in subtle but effective ways: I am really enjoying how contemporary Star Wars writers (both here and in recent Dark Horse books) weave prequel content so cleverly into a trilogy-era context. If you're a Star Wars fan this really is an essential monthly purchase. (5/5)

The Doctor's attempts to shut down ServeYouInc have ended in failure. He's now under their control, masterminding a dystopian city where imagination and storytelling is illegal, and people are rounded up and reconditioned to prevent dissent. It's all up to Alice, the Doctor's current companion, to fight back and save the Doctor from himself. This is an odd issue, because while like previous issues it accurately captures the tone and style of Doctor Who it actually captures the tone of the 10th Doctor rather than the 11th. It feels like a big Russell T. Davies finale, with all of the strengths (epic, grand emotional themes) and weaknesses (nonsensical plot, rushed climax) that entails. (3/5)

I get that brand is a big selling point for comic books, and that an easy way to get an audience and tell a story is to grab a pre-existing property and turn it into a comic. I reviewed The Fly: Outbreak last week, which was surprisingly decent, and this week I've got reviews of He-Man, Jem and the Holograms and Transformers. They're all valid properties for adaptation or reinvention. That said, I'm really not sure anybody is hanging out for a Miami Vice comic. This most 1980s of 1980s TV dramas gets a scrappy, comedic, off-kilter new take courtesy of writer Joe Casey and artist Jim Mahfood. I've liked work by both creators in the past, but this comic seems like an unholy mess. It's difficult to read, irritating to follow and garishly coloured. I recommend giving this particular book a wide berth, unless you're a keen fan of the creative team. (1/5)

I have heard a lot of great things about IDW's range of Transformers comics: how they've told complex, engaging storylines and massively expanded the fictional universe of the cartoon and toy line. Certainly this new miniseries seemed as good a place as any to start. It's a fairly overwhelming read, since it continues a number of ongoing storylines, but even without that background it proved to be pretty entertaining. Sarah Stone's artwork is great, and does a good job of distinguishing the various robot characters from one another and demonstrating the vast differences in scale between some of them. I also appreciated how the book focuses on a female Transformer: Windblade, a character created as a result of a fan poll a few years ago. As a child, the Transformers seemed overwhelmingly male - it's nice to see that is being addressed in comic form at least. At the most basic level this issue has giant robots smashing each other up, with always has a certain level of appeal. That it also has an actual plot and interesting characters is just the icing on the cake. (3/5)
Posted by Grant at 9:11 PM