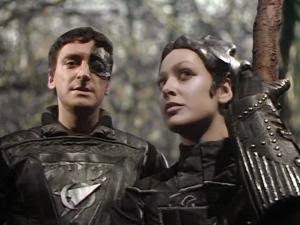 The Liberator arrives at a distant, long-dead planet, whose populations appears to be have been wiped out in a terrible war. The ship's power reserves are exhausted from constantly fleeing Space Commander Travis and his squadron of pursuit fighters. When Travis launches a fresh ambush, the situation looks grim - until the powerful survivors of the planet below intervene. Now Blake (Gareth Thomas) and Travis (Stephen Greif) find themselves in a dense forest, where they must kill each other in hand-to-hand combat - or learn not to fight at all.

"Duel" is the strongest episode of Blake's 7 so far. It succeeds because Terry Nation has managed to write a well-structured, strongly characterised script, but more so it succeeds because of its director, Douglas Camfield. Doctor Who fans know Camfield well as one that series' finest directors. He had an inventive eye for shot composition and timing, and pushed the technical limitations of the BBC to their limits. His Doctor Who serials included "The Crusade", "The Daleks' Masterplan", "The Invasion", "Inferno", and "The Seeds of Doom". Sadly this was the only episode of Blake's 7 Camfield directed, but at least in his one attempt he pulls off something really special.

The episode forms two halves. The first half presents a brilliantly tense build-up. The Liberator has arrived at the planet after a lengthy series of pursuits. The crew are exhausted, and the ship itself needs time to recharge its power banks. As viewers, however, we witness that they haven't managed to shake off Travis at all. He commands three ships, all hiding over the planet's horizon where Blake can't see them. Blake, Jenna and Gan teleport down to explore the planet's surface (and that's a creepy as hell place, populated almost entirely with mournful statues wielding broken weapons), and what could be a relaxed sort of scene is made incredibly tense by the knowledge that their ship is going to be ambushed at any moment. When the ambush does come, it plays out like a solid submarine thriller. It is tense, tightly shot and exceptionally well paced.

Then, just when the Liberator is about to ram Travis' command ship, everything stops. The ships are frozen in place, its crews incapable of operating them, and both Blake and Travis are transported down to the planet's surface. There, the all-powerful guardian Sinofar (Isla Blair) warns them to stop their violent activities. She, and her wizened companion Giroc (Patsy Smart, who's visibly having a whale of a time) are the only members left of their long-dead race. They remain to teach anyone who enters their system a lesson in the cost of violence. Blake and Travis are transported again to a forest, armed with knives, where they can fight to the death or swear off violence for good. Also transported there are Jenna (Sally Knyvette) and one of Travis' mutoid officers (Carol Royle); their deaths, should they come, will teach Blake and Travis the human cost of war. This second half then plays out as the two men manoeuvre around the forest in the hopes of catching the other off-guard.

The mutoids are an odd addition to the series. They work in concept: humans who have been stripped of their memories, so as to ensure their total allegiance to the Federation, and biologically transformed so that they can live off a blood-like plasma solution rather than the less efficient method of preparing and eating food. They can even subsist on human blood when the need arises, which is an effective and mildly horrific addition. Their downfall, and this is a regular problem with Blake's 7, that their costumes are deeply silly. The padded black uniforms work fine, as do their pale skin and reddened eyes. Sadly they are also fitted with ridiculous hats. I'm honestly not certain what the intention was, but 'space mushroom' is possibly the best description. It's hard to be a frightening antagonist when you're fitted with a space mushroom hat. Carol Royle does her best, and delivers a very strong performance, but it's like spitting into a firehose.

It is nice to see Jenna actually get something to do in this episode. She's already found herself relegated to staying on the Liberator and operating the teleport controls. Sadly before too long she's captured and tied up for Blake to rescue, but it's still a solid step in a better direction. Unfortunately it doesn't take. Before long she's back at the teleporter for the bulk of the series.

The relationship between Travis as his mutoid is interesting. He seems torn between finding them useful tools, finding them intellectually fascinating, and find them utterly repellent. He goads her by knowing her real name and her past, but then seems disappointed that she is so well conditioned by the Federation that she doesn't care. He exploits her to her phsyical limits - she's low on blood plasma and he won't let her feed on Jenna - and when he exceeds those limits he taunts her for what is, ultimately, his own failure in leadership.

There's a benefit to a sort of episode like this: the cast is small enough that everybody gets depth and nuance, the concept is strong enough that the episode never gets boring, and it has a tight-enough focus that its director can really work around the edges and make it something really special. This is really special. Eight episodes into Season 1, and Blake's 7 has had five good episodes. That makes for a quality ratio of 63 per cent.
Posted by Grant at 9:27 AM