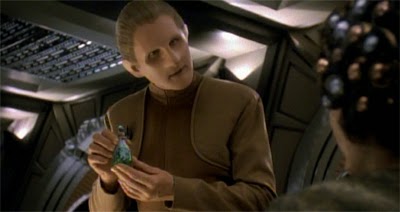 Season 3 was in many respects an odd season for Star Trek: Deep Space Nine. Season 2 had climaxed with the discovery of the Dominion: a massive, enormously powerful civilization on the other side of the Bajoran wormhole. It brought with it the threat of an all-out war for the Federation. Season 3 ends by-and-large in the same place. The pieces have moved around the board a little, and perhaps the threat of the Dominion is more finely developed, but we're still sitting on the edge of a precipice waiting for the series to jump.

So what has changed? For one thing there's the USS Defiant, a compact little warship that has enabled the series to step away from the station a little more often. Deep Space Nine always had a fairly bit challenge in front of it by being stuck in a comparatively stationary setting. The two preceding series, Star Trek and The Next Generation, put exploring new worlds and civilizations at the forefront, whereas for the first two years Deep Space Nine struggled to drag the action to them. The Defiant is a not-unexpected compromise: an attempt to keep the station setting but occasionally escape from it as well.

We have had some important character developments. The friendship between O'Brien and Bashir has been fully set up. Dax's background and history has been extensively revealed. Sisko finally moved on from mourning his wife. Jake and Nog both went in unexpected directions in regards to their approaching adulthood. Perhaps the most significant development has been for Odo: he ended Season 2 a lonely one-of-a-kind alien, desperately craving a home to call his own. He's finished Season 3 one of an entire species of aliens, but forced by morals and circumstance to fight against them. In the finale he even killed one of his own kind.

It's an odd thing: in broad strokes Deep Space Nine seemed to spend Season 3 running on the spot. In all the little ways that actually matter to the characters, the series has changed a hell of a lot. This is why it remains my favourite of the Star Trek series. It actually allows its cast to develop and grow.

Overall I don't think Season 3 shapes up quite as well as Season 2, but it's still wonderfully enjoyable television. So, out of the 26 episodes broadcast, which were the ones most worth watching? I'd recommend:
Conversely, if you're looking for episodes to avoid, I give a wide berth to: