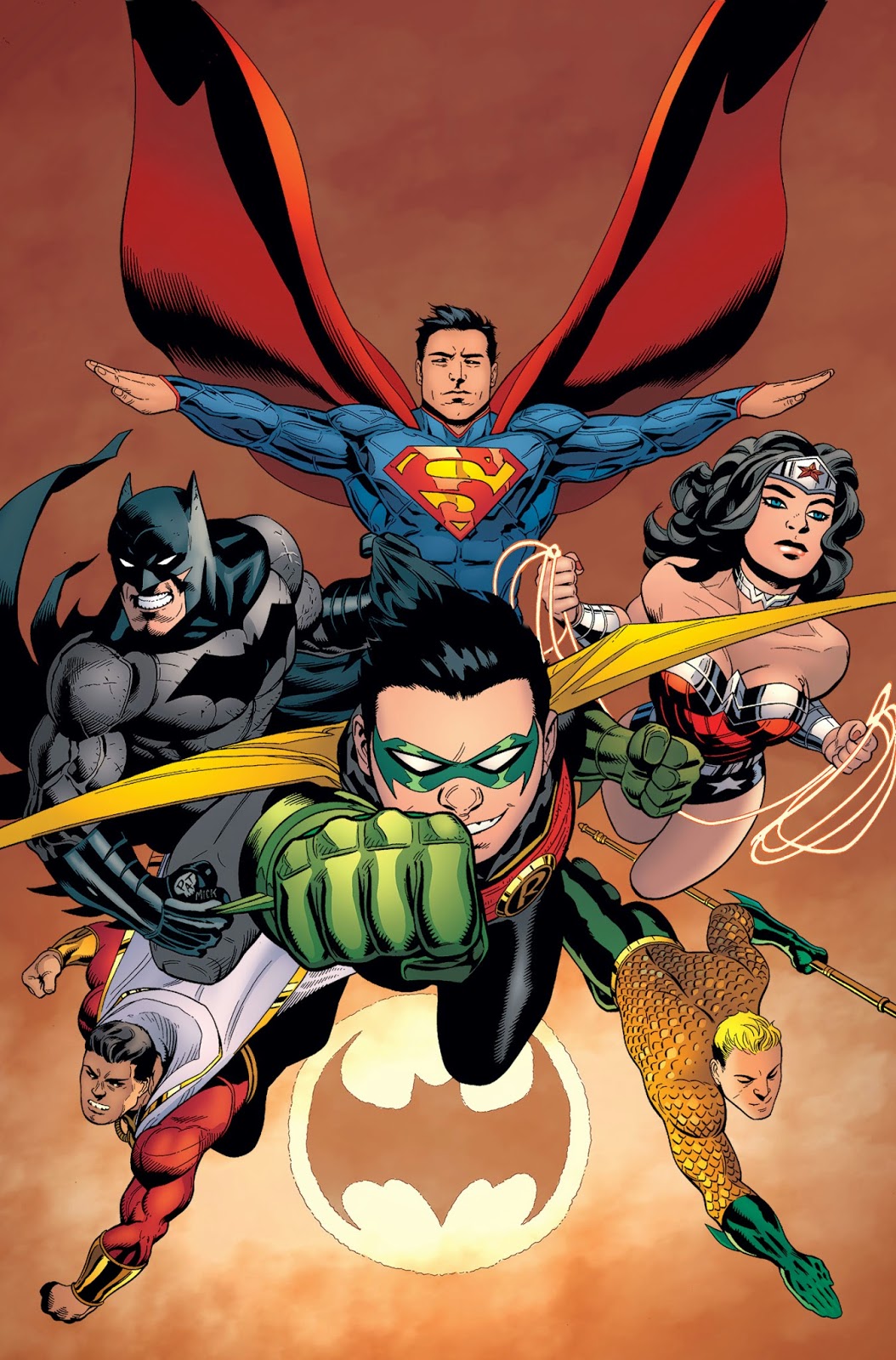 Batman and Robin has been one of the New 52's constants: high quality, well characterised, beautifully illustrated, and presented pretty much interrupted for almost four years by the same creative team: writer Peter J. Tomasi, penciller Patrick Gleason and inker Mick Gray. It's never quite hit the heights that some other DC titles have - Batman and Batwoman both spring to mind - but it's never been less than excellent. As a result it's been one of the books I've reached for first whenever it's popped up in my order at the comic shop.

Issue #40 concludes the "Super" storyline, in which a resurrected Damian Wayne has come back to life with the powers of flight and superhuman strength. It also concludes this volume: this is the final issue of Batman and Robin. In June, Damian Wayne returns in Robin: Son of Batman #1 with Patrick Gleason both writing and illustrating the book. I'll be picking that book up like a shot, but I'm actually rather sad. This book has sort of crept up on me. I talk a lot about how great Snyder and Capullo's Batman is, or how entertaining Batgirl has become, and in the background Batman and Robin has kept ticking away, providing month after month of near-flawless superhero adventure on an uninterrupted monthly schedule.

As a final issue this is great: it wraps up the "Super" arc neatly and effectively, and presents a really strong, warm bond between Bruce and Damian. I mentioned this while reviewing the last issue, but I really hope somebody at DC picks up on the amazing chemistry between Damian Wayne and Shazam: it has the makings of an all-new "world's finest" pairing and it'd be a shame not to exploit that with a miniseries or story arc somewhere.

So thanks to Tomasi, Gleason and Gray for an outstanding three-and-a-half years of superhero action, father-and-son bonding and wonderfully heartfelt emotion. It's been great reading it. (5/5)

Under the cut: more comic reviews from this week including The Autumnlands, Batman Eternal, Daredevil, The Fuse, Gotham Academy, He-Man, The Multiversity and The Wicked + the Divine.

An excellent issue filled with shifting loyalties and intrigue. Goodfoot continues to play both the wizards and the bison tribes, Leoroyd is clearly planning something fairly explosive to deal with those tribes, and the politicking wizards are playing ridiculous games of brinkmanship to secure their own reputations if and when they're eventually rescued. This is a transitional issue in effect, setting all the game pieces in their proper place before the first story arc concludes next month. That in mind, it's still a remarkably effective comic and tremendously enjoyable. Fantasy fans should all be reading this one: great characters, a creative storyline, and absolutely beautiful artwork by Dewey and Bellaire. (5/5)

It's the penultimate issue of Batman Eternal. Batman's tied to his own Bat-signal, unmasked by the Cluemaster. The city is on fire around him. All hope is- well, of course it isn't, because this is a Batman story. It's difficult to get a climax wrong for this kind of a story. While Eternal has suffered somewhat from a variable quality over the past year, it has managed to line up enough dominos in a row that it's pretty much all downhill racing from here. It's gripping, entertaining and features great art by Alvaro Martinez and Raul Fernandez. I can't wait to read the final issue. (4/5)

Matt Murdock's got a memoir coming out, everybody knows that he's Daredevil, and so in this issue it seems to have gone to his head a bit. He's wearing a bright red tailored suit instead of his Daredevil costume, and is really being both lawyer and vigilante at the same time. It's not the best of reads: I trust Waid enough as a writer to see where he's taking this, but as in issue in isolation it's actually kind of irritating. Things pick up when Matt encounters the costumed daughter of the Owl, leading him on a chase and into a great cliffhanger ending, but overall this wasn't Daredevil at its best. (2/5)

Marlene and Klem continue their investigations, in a complex case involving drugs, illegal racing and the dangerous, grimy slums of the Fuse. I've really liked how this second case has expanded our understanding of the Fuse - a giant orbital space station - and just how varied and complicated its society is. It gives a really fresh vibe to what continues to be an effective police procedural. This issue has plenty of unexpected developments, and with one more issue to go I genuinely don't have a clue how it's going to end - which is fantastic. This is a brilliant comic book: tight, clever storylines, effective world-building, distinctive artwork and realistic and interesting characters. What more can you possibly want? (5/5)

It's the end of the first story arc for Gotham Academy, and it features Killer Croc, Batman, and an unexpectedly super-powered schoolgirl. Questions are answered, and the stage is set for the series going forward. Now that we've finished one complete storyline, it's easy to see what a delightful book this has turned out to be. Karl Kerschl's artwork has been engaging, and combined with the rich colours looks somewhat like a really good Saturday morning cartoon. The writing has been solid, with a likeable group of lead characters and a style that's essentially boiled down to "Harry Potter with superheroes". It's such a relief to see DC publishing books like this, which are at their heart upbeat and hopeful works as opposed to the grim, relentless stuff that's become the publisher's default setting. (4/5)

I thought this was a miniseries, and was concerned about its relatively slow pace. It turns out this is actually an ongoing series. I should have seen it coming: what "eternity war" would only last six issues? This issue sees He-Man bond with the snakemen while She-Ra has a sword fight with Hordak. It's all pretty much by-the-numbers stuff for this series: fairly ordinary storytelling, reasonable artwork, and a procession of 1980s action figures to please the blindly nostalgic. The climax ups the ante considerably, so while this is by no means an exceptional comic it's managed to get my money for another month at least. (2/5)

Grant Morrison wraps up his particularly odd and self-indulgent DC miniseries The Multiversity with this: a superhero retelling of The Monster at the End of this Book. That was a favourite children's book of mine: the Muppet Grover would beg you, the reader, to stop reading book because he's heard there's a monster at its end. In the comic it's a desperate hero pleading with you, the reader, to stop reading the book because the multiverse will be destroyed at its end, but the effect is identical. It's a typical post-millennial Morrison book, really: a lot of clever ideas (this is the comic book everyone was reading in the other issues of Multiversity), references that would trouble the most dedicated of DC Comics scholars, and all tossed together in a bit of a messy rush. It's readable enough for Morrison fans, but everyone else might be better off giving it a miss. (3/5)

Previous issues of The Wicked + the Divine have tended to focus on one of the pantheon of Gods who walk contemporary Earth, treated like modern-day rock stars until they die after two years. This issue isn't too different, focusing on Ananke. This character's a little different: thousand of years ago she sacrificed godhood for immortality, so that she could guide each generation of deities in their powers and duties. It's a wonderful expansion of the WicDev world, and it's told in a very deliberate and up-front way: as an interview. This is a great, intelligent and challenging comic. (5/5)
Posted by Grant at 5:09 PM