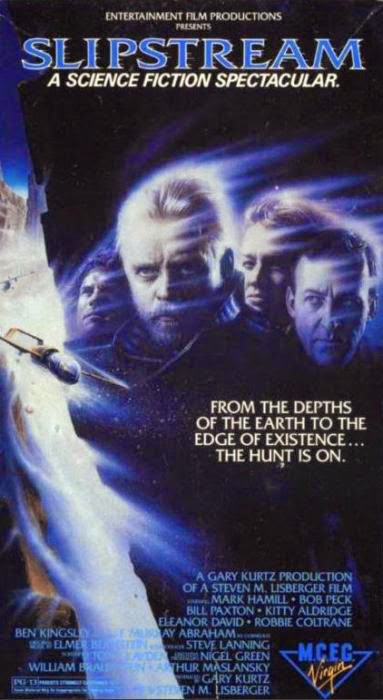 Steven Lisberger may not have had a commercial hit with his 1982 film Tron, but he certainly found a highly appreciative cult audience and left behind a film that seemed to get more viewers with each passing year. Nonetheless the financial failure of Tron was a likely reason why he didn't direct another film for five years. That film, the John Cusack vehicle Hot Pursuit, was another commercial flop. Two years later he followed it up with Slipstream, a post-apocalyptic science fiction film that remains his final film as director.

On paper, Slipstream seemed like a guaranteed box office success: a science fiction film from the director of Tron (which was only getting more popular by the year), produced by Star Wars producer Gary Kurtz, and featuring the much-delayed return to the big screen of Mark Hamill after several years away. The cast included the likes of Bill Paxton, Bob Peck, and Oscar winners F. Murray Abraham and Ben Kingsley.

In practice Slipstream had its independently-financed budget collapse underneath it with days before production commenced. Lisberger limped along the best he could, but the completed film looked so disappointingly cheap and weirdly episodic that no American distributor would touch it. In the end it went straight to home video, with a cinema release only in the UK, Australia and Japan.

It gets worse: without a studio distributor, and with Kurtz's production company going bankrupt as a result of the film's failure to sell, Slipstream fell out of copyright. Today it's a film without an owner, and therefore no one with the access to an original print nor an incentive to remaster it for a proper home video release. It's watchable via YouTube, or on one of numerous bargain-basement DVDs struck directly from an old VHS copy. Unless you can get your hands on - and be able to watch - the Japanese laserdisc edition, you can't even watch the film in its intended aspect ratio.

So seen through a shaky duplicate of an old video, how does Slipstream hold up? As one might expect it's scrappy as all hell to look at, and the sudden loss of budget is really obvious. In many respects this feels like a quick run-through of a movie before it's properly made, with some fairly odd jumps in the narrative and a rather episodic story structure.

The story is essentially this: in the future the Earth's environment has degraded to the point where fierce winds have ripped deep chasms across the planet's surface. Humanity now survives in small pockets and communities along what is called "the slipstream", and travel between them in a variety of light planes and gliders. A man named Byron (Bob Peck), who is wanted for murder, has been captured by the bounty hunters Tasker (Mark Hamill) and Beliski (Kitty Aldridge). When they stop at a small community to refuel, their quarry is kidnapped by an opportunistic hustler named Matt Owens (Bill Paxton). Owens takes Byron with him, hoping to cash in on the bounty himself, with Tasker and Beliski in dogged pursuit.

From there the story is basically a series of encounters as Owens and Byron travel from community to community. Each character's back story is fleshed out, as is the post-apocalyptic world that they inhabit. These encounters feature a number of surprising cameos from well-known actors, including F. Murray Abraham, Ben Kingsley and Robbie Coltrane. Some of them work, while others tend to drag a little. The movie undergoes a fairly severe change in tone in its third act, as Byron and Owens are invited into a secret enclave of the world's ultra-rich - with ultimately tragic consequences.

Where the film excels is in two of its lead performances. Bob Peck is great as the relatively naive, incessantly polite Byron. He seems an extremely odd person at first, but as the film goes on he makes more and more sense - particularly once his key secret is revealed to the audience. Peck, probably most famous for his roles in Edge of Darkness and Jurassic Park, was one of the best British actors of the 1980s and early 1990s. When he died of cancer at the age of 53 the UK lost one of their best; had he survived, I have no doubt Hollywood would be holding in similar esteem to contemporaries like Anthony Hopkins and Alan Rickman.

The absolute standout, however, is Mark Hamill. This was his first on-screen performance in six years, having abandoned film immediately after Return of the Jedi to work on Broadway. He is fantastic, giving Tasker a confident, relaxed, almost bored demeanour that makes him far and away the most interesting character in the film. It's a performance worlds away from the idealistic Luke Skywalker, and demonstrates just how strong an actor he actually is. Typecasting has meant that Hollywood has never fully appreciated Mark Hamill, and it's a shame he never got the kind of career afforded to his former co-star Harrison Ford.

This film is a curate's egg. Its budget issues effectively hamstrung it from the beginning, and with all due consideration it is not a good film. It is a very interesting one though, with some intriguing world-building and a couple of outstanding performances to make it well worth experiencing. Good luck finding a watchable copy, though.
Posted by Grant at 9:53 AM