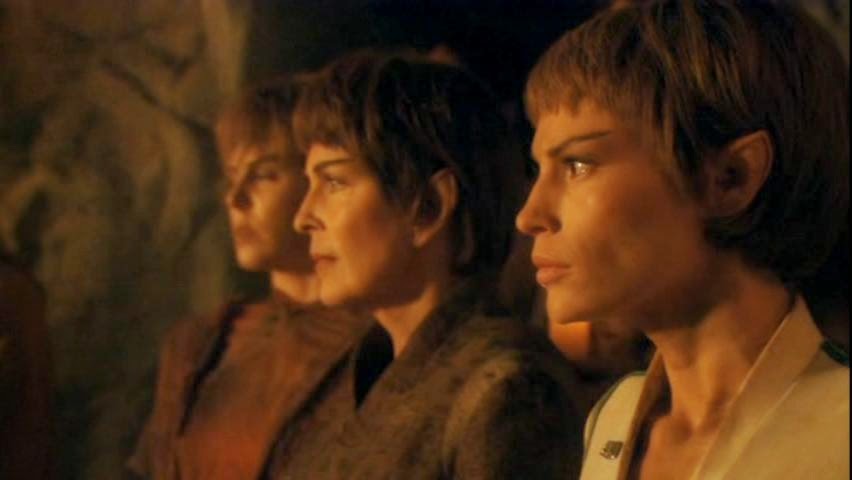 The 'katra' of the legendary Vulcan leader Surak, who died 1,800 years ago, has been inserted into the mind of Captain Archer (Scott Bakula). The Vulcan Suranite leader T'Pau wants it out at all costs - even if it means taking Archer's life. Meanwhile the Vulcan high command prepares to bomb the Suranites and kill them - unless Commander Tucker (Connor Trinneer) and the Enterprise can get word to Archer in time.

"Awakening" continues Enterprise's Vulcan trilogy, and while there's clearly been a lot of work put into making the episodes my objections to them remain the same. This is a weird parallel version of the Vulcans where they are petty warmongerers. They seem very far removed from the Vulcans with whom regular Star Trek viewers are familiar. While it's arguable that they might have significantly changed in the generations from Enterprise to the original Star Trek on a gut level it feels tremendously unlikely. If I'm not convinced by the basic concept of your story, I'm probably not going to enjoy your story.

Part of the problem is that Vulcans, even in the context of this story, are supposed to be logical and calm and keep their emotions in check. Instead nearly every one of them seems one step away from a screaming tantrum. In effect their entire culture and back story has been twisted out of alignment to fit the story. That story also sees fit to make Jonathan Archer a pivotal figure in allowing the Vulcans to become the culture and civilization with whom earlier audiences were familiar. It's all back-to-front and upside-down, and seems typical of this season's attempts to shoe-horn continuity references into stories that only exist to exploit those references. This is no way to produce a mainstream science fiction TV series, and while I'm aware that by this stage the ratings were tanking and desperation was sitting in this was quite possibly the poorest creative direction in which the production team could have headed.

Gary Graham, unusually, seems to escape much of the episodes problems. As the now former ambassador Soval he actually gets to perform a character with depth, serenity and nobility - exactly the sorts of traits we expect to see in a Vulcan character. Conversely Kara Zediker is weirdly emotional and huffy as the legendary Vulcan priestess T'Pau - so famous that someone named a British pop group after her. She's completely unconvincing, and that in turn makes her characters actions unconvincing.

The episode ends with T'Pol's mother (Joanna Cassidy) dead, and the Enterprise forced out of orbit by a suddenly militaristic and emotive Vulcan leader V'Las. They're off to Andoria to reveal V'Las' plans to launch a preemptive military strike against them. I suppose if nothing else that means we've got Jeffrey Coombs' Commander Shran to look forward to.

This is not a good episode, and it feels like the 'not-good' episodes are beginning to stack up somewhat. We're now eight episodes in, and only half the episodes have been worth rating: a quality ratio of 50 per cent.
Posted by Grant at 10:36 PM