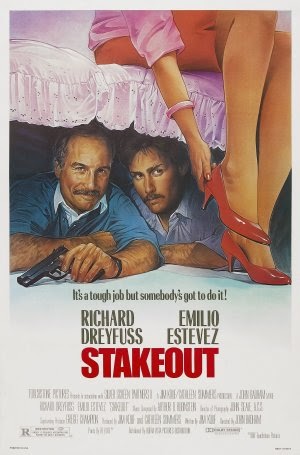 Seattle police detective Chris Lecce (Richard Dreyfuss) and Bill Reimers (Emilio Estevez) are assigned to a stakeout of Maria Maguire (Madeleine Stowe) - the ex-girlfriend of a dangerous prison escapee (Aidan Quinn). When Chris surreptitiously enters into a romance with Maria, he puts the investigation and his own career at risk.

Stakeout was one of the unexpected hits of 1987. It wasn't a high profile blockbuster, and lacked wall-to-wall action or eye-catching visual effects, but its combination of appealing performances and a tightly written screenplay struck a chord with audiences. It finished up as the 8th highest-grossing film of its year.

28 years later and the performances still appeal and the screenplay is clearly very well written. It's also damn-near unwatchable thanks to some fairly profound changes in how we perceive the lead character's behaviour.

We're clearly supposed to like Chris Lecce. He's funny, he's a good cop, and he is played with a lot of energy and humour by Dreyfuss. He's also a frightening obsessive stalker. He uses a position of power - he's been watching Maria every night from across the street - to ingratiate himself into her life and, under false pretences, enter into the beginnings of a relationship with her. When he goes into her house disguised as a phone technician he searches through her underwear drawer. When he's trapped in there a second time and hides under her bed, before escaping through a window he can't help himself from peeking at her naked in her shower. He lies with her, and she buys the lie and has sex with him.

Now the film does show Chris is conflicted over his actions, but they also explicitly tag them as something that's rather funny and cheeky rather than creepy and invasive. I remember finding this film hilarious as a child. As an adult, while I can recognise the enormous talent in putting it together, it feels sleazy and rather ugly. Of course, being a Hollywood movie by the end Maria has discovered Chris' true identity and has forgiven him for his deception. That actually seems to make things worse: it signifies his actions as actually being okay because he got the girl in the end. It's not okay. I ended the film shouting at the screen for Maria to tell him just how vile a human being he was and to leave him behind.

Surrounding this unpleasant narrative are some genuinely good bits of filmmaking. Emilio Estevez is charismatic and immensely likeable as Chris' straight-laced partner Bill, who warns him of how inappropriate he's being and is the only character to pull him up for his behaviour. Aidan Quinn is a great and believable villain. There are some solid supporting performances by the likes of Forest Whitaker and Dan Lauria. Madeleine Stowe is great as Maria, showing wonderful depth and thought behind her performance - which I think just makes Chris' deceptions seem even worse.

The film also has some wonderfully realistic and banal action. There are shootouts, but they're brief and the characters rather inaccurate. There are a couple of car chases, but they end pretty disastrously as high speed car chases generally do. The whole film has a nicely small scale to it all: it doesn't stretch credulity, and instead focuses on doing its own small story the best it can. That's pretty typical of its director, John Badham, who pretty much made his career out of directing tightly written, modestly sized thrillers and action flicks.