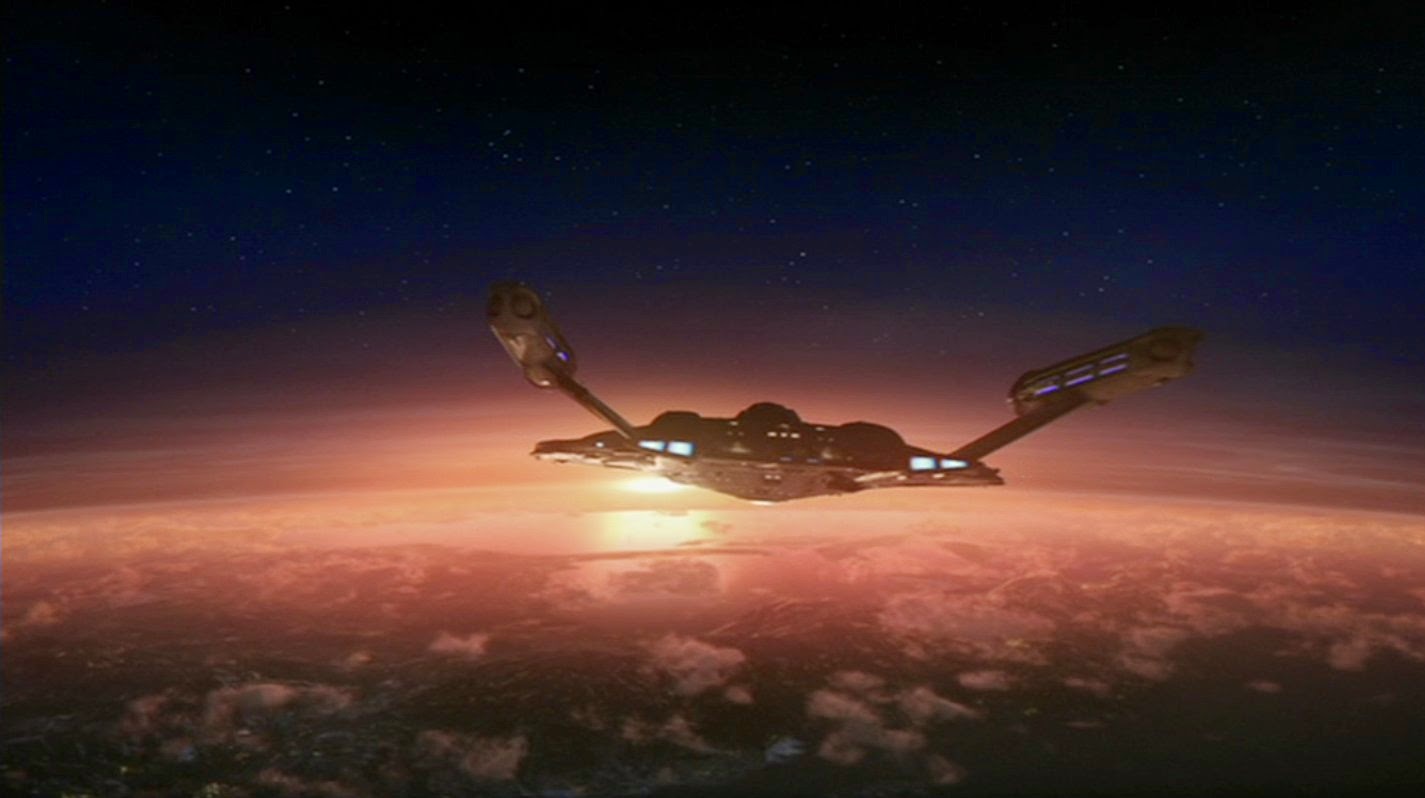 Captain Archer (Scott Bakula) and his crew remain trapped in the 20th century, however with the aid of the Suliban operative Silik they may be able to redirect the course of history and end the temporal cold war once and for all.

It's a general trend in Star Trek that the second half of a two-part story is not as good as the first. This had me particularly worried about this episode, since the first part of "Storm Front" was a pretty confused and tedious affair. It's a relief that this second part picks up the pace, streamlines the narrative and actually presents something half-watchable - even reasonably enjoyable. It's apparent in retrospect that "Storm Front" was created with a single purpose: to end the cold war arc once and for all. In that respect it's a qualified success.

This episode achieves a lot of things that the last episode failed to do. For one thing it has a cleanly defined, relatively engaging villain. Vosk (Jack Gwaltney) is a time-travelling alien willing to cooperate with anyone (in this case, the Nazis) if it means he can secure the resources to build a new time machine and return to his own time. He's a relatively charismatic character too, as evidenced in his forest conversation with Archer early into the episode. Another strong achievement the episode makes is giving the characters a very specific goal: part 1 was a riot of confused characters freaking out that they were in the 1940s, whereas part 2 is about a specific mission to find Vosk's time machine and blow it up.

The Enterprise itself gets a great climax as it descends all the way down to the skyscrapers of New York, shooting up plasma-cannon powered German fighter planes in the process. The reduced budget is visibly reducing the look of these kinds of scenes, but it's still edited and shot with integrity and the beaten-up look of the Enterprise - still wounded from its encounters with the Xindi - is fantastic.

John Fleck makes a final appearance as Silik, and it's definitely his best. Over the past three seasons he's developed into one of Star Trek's more underrated antagonists, and it's good to see the character received a solid and entertaining send-off. While Silik disguises himself as a human Fleck actually gets to act without make-up for once, which is a nice touch.

Also making his final appearance in the series is Matt Winston as Daniels, the temporal agent whose evasive, backstory-free conversations with Archer have been a consistent frustration since Season 1. It's hard to blame Winston for Daniels having been as annoying a character as he was, since there's never really been a character there: just a cypher to express complicated bits of time-travelling plot.

And, by the episode's end, the temporal cold war is finally over and done. It's been a constant crippling effect on the series since day one, complicating what could have been - and often was - a tightly constructed low-tech predecessor to the likes of Kirk, Picard and Janeway. It must have been driving viewers away by the thousands, with its needless technobabble and complicated explanations. Take this very episode: Vosk didn't change history to make the Nazis win World War II, he just used their technology to return to his own time. After he got back to his own time, then he kicked off a temporal war whose attacks included someone going back in time and letting the Nazis win the war, even though the war in which they participated to make that change only happened due to circumstances created by their changing the history of World War II. Honestly, it's enough to make me cross-eyed - and I'm a hard-core fan of the franchise.

"Storm Front, part 2" takes a potentially awful story and pulls it aggressively into shape. It's got nice moments of character, it rattles along at a great pace, and has more than one striking moment to make you sit up and take notice. I'd call that a success. It leaves Season 4 with a quality ratio of 50 per cent.
Posted by Grant at 8:41 AM