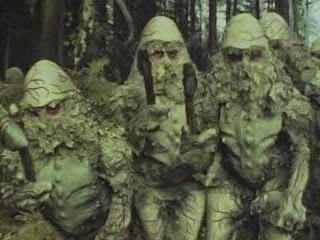 Cally (Jan Chappell), the newest member of the Liberator's crew, is acting strangely out of character. She's sabotaged the ship, planted an explosive device, and now holds her companions hostage at gunpoint. Meanwhile the Liberator is flying blind into deep space - and into the grip of a massive space-bound web that will trap it there forever, unless Blake (Gareth Thomas) is willing to assist with genocide.

"The Web" is a shriekingly awful hour of television, one so bad it actually provides a perverse sort of entertaining value. Its story is based around psychic exiles from Auron, Cally's home planet, who have extended their lifespans by forming a weird, shrivelled sort of puppet body in a tank of water. To undertake physical tasks they have created New Romantic lookalike servants, and they defend their complex from the tiny, mushroom-like Decimas (played by small actors in incredibly cheap and unconvincing costumes).

"The Web" has a particularly jarring story. We've watched for episodes in a row that have featured a strong narrative drive of Blake escaping and then fighting the Federation. Suddenly the Federation are nowhere to be seen, and instead we're left dealing with psychic muppets and mushroom people. To their credit the cast perform it all with a straight face, but I can only imagine the quantity of outtakes with material this silly.

It's also slightly unfortunate that for her first proper episode in the series, Cally gets taken over by someone else, gets knocked unconscious and then barely appears for the rest of the episode. This seems particular odd when it was members of Cally's own civilization that took control of her mind and forced her to sabotage the ship. That she doesn't then accompany Blake down to the surface to confront them is bizarrely weak writing.

There is a potential in the episode for a moral quandary: Blake needs the cooperation of "the Lost" (the gestalt puppet person) to free the Liberator from the web, but if he gives them the power cells they require they will eradicate the entire population of Decimas, the genetically-engineered species that they have created, and which have now evolved into a sustainable life form in their own right. This quandary is never sufficiently explored: the episode spends more than 25 minutes getting the Liberator into the web and Blake onto the surface, and that leaves about 20 to cover the episode's actual plot. Everything seems superficial, and everything in this second half feels rushed.

"The Way Back" and "Space Fall" were both great episodes. "Cygnus Alpha" and "Time Squad" were both pretty poor, but were compensated for by entertaining dialogue and characterisation. This episode is just flat-out awful. There's a nice scene between Avon and Gan early on that explains the Liberator's auto-repair systems - and gives Avon a chance to freely insult Gan's intelligence - but beyond that, there's very little of the character stuff that tends to make Blake's 7 worthwhile. The costuming and make-up in particular is risible: neither the Lost nor the Decimas can be treated seriously, and the Decimas also get saddled with piercing shrieks for voices that have one reaching for the remote.

So after five episodes Blake's 7 is hovering around a quality ratio of 40 per cent. This is a pretty good demonstration of the weakness of my binary episode-by-episode ratings system, since in all honesty this is the only one of the five that I haven't in part enjoyed. Rules are rules, however, and going purely on the quality of each individual episode there really only have been two of them so far. I really hope things pick up soon (spoiler: they do).
Posted by Grant at 11:27 AM