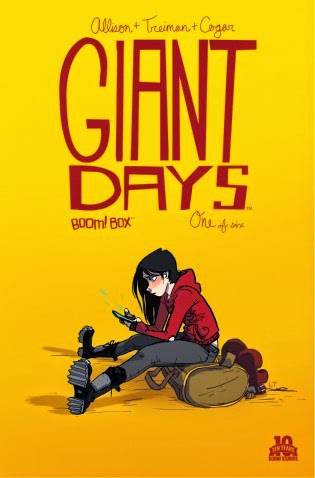 It can't all be superheroes and science fiction: this week I jumped at the chance to sample Boom Studios' new title Giant Days. It's not, as you might expect, some kind of fantasy about giants. Instead it's a humorous book about three young women in their first semester at college (university to us southern hemisphere folk), having the sorts of lives one expects college students to have.

It's a really enjoyable read: there's nothing here that is going to blow your mind or leave your jaw hanging on the floor, but it's a genuinely enjoyable read with likeable characters and a nice cartoony art style. Sometimes that honestly is enough to make a book worth purchasing, and I really do think this book is worth checking out.

I'm not familiar with the creative team. John Allison is, I am reliably informed, a very successful webcomics author. Artist Lissa Tremain illustrates his story wonderfully with a sort of style that really brings a warm smile to your face. Some times, as a reader, you really do want to just relax and read something fun and breezy. This book qualifies as both, and is a great addition to Boom's expanding range of titles. (4/5)

The first arc for DC's revised and enhanced Batgirl wraps up, and it's all pretty exciting stuff. Last month's cliffhanger is explained in a fairly believable way, and while the resolution itself suffers from a pretty enormous cliche it all still winds up in a very satisfying fashion. It may have just led to a pretty clever reinvention of a former fan-favourite character as well. This book is standing up as a strong signal to the rest of DC's creators and editors: things don't all have to be grim and gritty to be entertaining - in fact DC's characters seem to work better the more optimistic and breezy they are. (4/5)

This is another one-shot tie-in to Batman's Joker-centric "Endgame" arc. It's a pretty simple story - Batgirl is helping civilians escape the Joker gas-infected hordes past the barricades on Burnside Bridge. What makes it work so well is Bengal's stunning artwork (more please, DC) and the fact that Stewart and Fletcher have written the issue without any dialogue. It's a difficult trick to pull off, and while they do tell a very short, small story here it's a really entertaining one. (5/5)

With only two more issues to go, Batman Eternal finally reveals the ultimate villian behind this entire epic storyline: or has it? I'm unconvinced by this issue's final page revelation, so either Synder and co have a lot of really good explaining to do next week, or it's yet another red herring in a string of red herrings. The issue in itself is a bit of quick whip around Gotham for Batman to do what Batman does best, and to tidy much of the third art crises up before the main climax can play out. It's broadly entertaining stuff, but I'm not sold on the cliffhanger. (3/5)

This is the final regular issue of Batwoman, although it turns out there's an annual coming soon that wraps up the storyline. This used to be a remarkable book boasting a great lead character, strong supporting players, and inventive and beautiful layouts and art. The art these days in fairly ordinary, to be honest, neither great or awful. The characterisation has gone out of the window. The storytelling has become unfocused and messy. How long have we been reading this "Kate Kane is a vampire" storyline? It feels like forever, and it gets wrapped up in this issue in a manner that's deeply disappointing and actually slightly insulting. I do hope DC finds a way to repurpose Batwoman in another book, because she's a great character, but Andreyko is not doing her many favours here. (1/5)

Anybody expecting to get proper answers about Chaos in this issue will walk away a little disappointed: we do get some insight into the mysterious agency against whom Natasha has been fighting throughout the series, but really this issue exists to give us a powerful flashback to Natasha's tragic youth. It's a very well written flashback, although certainly it's not one with many surprises. It's just a really solid combination of tight writing and beautiful artwork. Phil Noto's been doing amazing stuff on Black Widow, and I've been particularly impressed that he's managed such painterly artwork on a monthly schedule. (4/5)

David Cronenberg's The Fly initially seems an odd property for IDW to adapt into a comic book. What's stranger is that this new miniseries appears to actually be a sequel to The Fly II, the much less well-regarded sequel directed by Chris Walas. Martin Brundle, the son of original scientist Seth Brundle, continues to work on developing a means of restoring human-fly hybrid Anton Bartok back into a fully human form. When the latest trial goes terribly wrong, and the mutated Bartok is let loose in the facility, everyone there is locked inside to ensure no one is infected or transformed. It's a classic set-up for a tense sci-fi/horror story. I have to admit I was highly skeptical coming into this book, but it won me over with a combination of strong, relatively fast-paced writing, and menton3's expressive artwork. It's the kind of art that balances between the photorealistic (and certainly there's a lot of photo-referencing going on) and the highly sketchy and abstract, and reminded me a great deal of Ben Templesmith's work on 30 Days of Night. This may not have been the spin-off book any of us expected to see, but it's a surprisingly worthwhile attempt. (3/5)

It wouldn't be a week of new comics without a new science fiction book to try out. It really is the growth area for American comic books these days; as a science fiction enthusiast I'm hardly likely to complain. Shaper is set in a galactic civilization known as the Commonwealth, where shape-shifting aliens are hunted down and killed by the government. Spry is an orphaned teenager who... and so on and so forth. To be honest within five pages it's pretty clear where this miniseries is going. By his own admission in this issue's afterword, Eric Heisserer wrote this comic book as a pitch to help him launch Shaper as a feature film. To his credit, at no point does it feel like it. This is a solid, arguably slightly old-fashioned kind of comic. It's solidly written and illustrated, and is reasonably entertaining. Just don't expect to be surprised. (3/5)

As an extra bonus, here are a few bonus reviews of books I've caught up with that actually got released over the past two weeks.

This is, in itself, a pretty great issue. Kamala is moving onwards and upwards from her fight against the Inventor, and meets a nice boy, and has to run away from him to fight a crime, and it all ends with a neat surprise to hook us into issue #14. Guest artist Takeshi Miyazawa does a great job. My main problem is that this book looks as if it's about to get properly sucked into Marvel's insane attempt to make a mass comics audience care that much about the Inhumans. I mean I get it: Marvel Studios don't have the rights to make X-Men movies themselves, and so if they up the profile of the Inhumans then they have a ready-made replacement. The problem is that it all feels so utterly obvious and commercial. I promise I will go and see the Inhumans movie, Marvel: you don't need to work at me like this. (3/5)

This was originally published back on 5 March. This ninth issue of one of 2014's best comic book has been a really long time coming. Previous artist and series co-creator Roc Upchurch stepped down under some fairly unpleasant circumstances, but now after a break of many months the series is back in action with new artist Stjepan Sejic. He does an immediately impressive job, retaining the look and feel of Upchurch's own art while clearly adding his own personal slant. It's testament to Wiebe's skills as a writer that I was able to jump back into this serialised adventure after such a long break and not be confused. The sex, drugs, violence, comedy, bad language and Dungeons & Dragons pastiche that all came to typify Rat Queens have returned intact. Hopefully with a regular release schedule this book can pick up some momentum again. (5/5)

Oh come on. Even the cover of this issue asks: who is Thor? We've run for six issues in a row now with this tedious mystery about which woman in Odinson's life has assumed his superheroic identity. The problem is that there's not actually a proper storyline to read here, just a fairly complicated set of overlaid conversations. There isn't a real mystery either: just a constant dangling of maybe revealing Thor's identity and then snatching that revelation away again. Jason Aaron is a great writer, but for some reason he's stalling. Russell Dauterman is drawing sensational art. The longer they hold off on revealing Thor's identity the angrier I get. It's infuriating because this has been a great Thor comic in the past, and since this regendering and renumbering a lot of the older appeal is gone.(3/5)
Posted by Grant at 10:55 AM