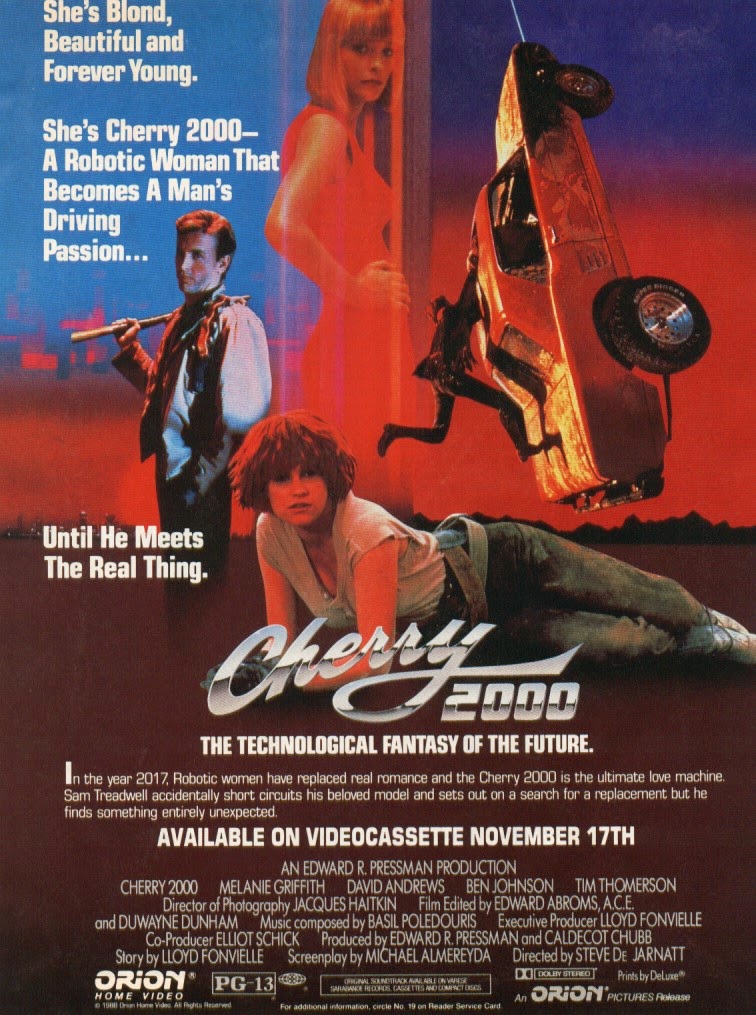 Sam Treadwell (David Andrews) manages a recycling plant in the post-apocalyptic California of 2017. The rich, like him, live in garishly lit cities, their social and sex lives negotiated by lawyers. When Sam's robot girlfriend Cherry short-circuits, and Sam discovers that there are no new models available in Los Angeles, he is forced to venture out into the wilds of California and Nevada in search of a replacement. On his way he is accompanied by a gun-toting 'tracker' (Melanie Griffith) while avoiding the roaming gunmen led by a violent regional warlord (Tim Thomerson).

After rewatching Steve De Jarnatt's thriller Miracle Mile, it seemed an appropriate time to watch his first film Cherry 2000. While he has continued to work as a director for American television, Miracle Mile and Cherry 2000 are the only feature films he ever directed. It's immediately obvious when watching this earlier film that it's from the same director. It shares the same garish, neon lighting, the same odd disaffected performances, and a very similar line in 1980s 'yuppie' culture satire. Unlike Miracle Mile it's difficult to defend Cherry 2000 as a good movie by any reasonable definition, yet while watching it I cannot look away.

For one thing the film's gender roles are all horribly out of whack. Sam is in love with his submissive blonde sex robot, and in most respects this feels like some form of societal comment about a lack of intimacy in the 21st century. On the other hand we are clearly encouraged to side with him and sympathise during his long road trip to find his robot a new body. E, Melanie Griffith's single-lettered tracker, is presented as a hard-edged, cynical mercenary, and yet as soon as she's in a car with Sam for a few days she's head-over-heels in love with him and deeply jealous of his robot. Somehow by the climax it's Sam the feckless yuppie who rescues the supposedly skilled gunslinger E, and it really feels like it's supposed to be the other way around.

The film picks up remarkably once Sam is knocked unconscious and wakes up in some surreal 1950s motel in the middle of the desert. There he meets his weirdly delusional ex-girlfriend Elaine, and the regional warlord Lester (Tim Thomerson) who hates all trackers and shoots them on sight. Thomerson is clearly having a ball with his role, and his enthusiasm gets rather infectious. The last 30 minutes of the movie is a lot more enjoyable than the first 60.

David Andrews is a capable lead as Sam. Melanie Griffith does what Melanie Griffith usually does, which is fail to be convincing in almost every role she's ever played. I'm pretty sure the only film in which I've ever genuinely rated her performance is Mike Nichols' Working Girl, and she's utterly remarkable in that. I have no idea why she's so hypnotically awful in everything else.

Orion Pictures funded this film in 1985, but then financial problems led them to abandon a theatrical release in the USA. It got released internationally through more solvent distribution partners, but it didn't get a USA release until late 1988, direct to video at that, purely to cash in on Griffith's Oscar-nominated performance in Working Girl.

There is clearly something of worth in Cherry 2000, because this isn't the first time I've watched it and I made it easily to the end both times. I think the satirical elements work well, and Thomerson is pretty funny. Good lord, though, it's a bad movie.
Posted by Grant at 9:32 AM