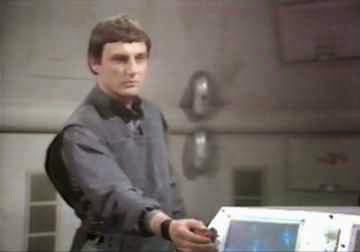 While en route to the penal colony Cygnus Alpha, political rebel Roj Blake (Gareth Thomas) gets to know some of his fellow prisoners: the smuggler Jenna Stannis (Sally Knyvette), the thief Vila Restall (Michael Keating), the hulking and muscular Olag Gan (David Jackson), and the acerbic, self-interested computer hacker Kerr Avon (Paul Darrow). When the chance to overthrow their captors arrives, Blake and his companions are quick to grab it - but events do not quite transpire as they have planned.

Watching "Space Fall" immediately after "The Way Back" causes some mild confusion. That was a largely self-contained political thriller based around a single character. "Space Fall" is more like the Blake's 7 I remember. Firstly it's much cheaper looking. Secondly it has a wider spread of characters and a sudden and very strong line in biting wit. This is critical to the series' success. You don't watch Blake's 7 for the visual effects or the sets; the series had a lower budget per minute than even Doctor Who. You also don't often watch it for the plots; they're often rather generic and stereotypical, as they are in this episode. You watch it for the distinctive characters and the sharply written dialogue.

Okay, so you watch it for Avon and Vila.

Let's start with Vila. He was introduced in the first episode, but as I noted in its review he really doesn't act in that episode the same way he does in all of the others. He's the most regular character in the series, appearing in all 52 episodes - the only character to do so. Regular Vila is an out-and-out coward. He travels with Blake's mini-revolution because it's safer than going it alone. Such a character could be rather irritating to watch, but he's redeemed by two features. Firstly he's actually rather smart behind his panic and bluster. Secondly, he gets the series' second-best lines.

Who gets the best lines? Naturally it's Kerr Avon: self-interested, blunt, cynical and so wonderfully dry. 'You've got an army of five,' he snaps at Blake here, as Blake attempts to mastermind a ship-wide prison break. 'Five,'he says, nodding to Vila, 'and him.' Avon begins the series as the guy who says all of the vaguely annoyed quips about the other characters and the storylines that the less forgiving members of the audience want to make. He ends the series, four seasons later, as the oddest protagonist in British television: a paranoid murderous sociopath who has tried (and in one case succeeded) to kill his own friends. Watching that transition is one of Blake's 7's greatest achievements.

And it's when these two characters appear together that the series absolutely thrives. Blake is a fairly two-dimensional, earnest character. There are not many layers to him, or inner conflicts, or hidden agendas. Those sorts of things get left to Avon and Vila. Generally when someone says they're a fan of Blake's 7, what they actually mean is that they're a fan of its two best characters: the actors portraying them, the writers giving them words, and the directors bringing them to life. They're marvellous.

Anyway, so what about "Space Fall" itself? It's an odd episode, again clearly written by Terry Nation as he went along because it's narrative structure is all fouled up. It's remarkably episodic, and simply ends in the middle of the story, to be concluded in "Cygnus Alpha" the following week. The events themselves are all remarkably old-fashioned as well. If it wasn't for the dialogue and the appeal of the characters, it would probably be rather dull.

Leslie Schofield (you'd recognise him from Peter Cushing's boardroom meeting in Star Wars) plays a slightly over-the-top sadistic ship's commander named Raiker, which would be a little silly if he wasn't well balanced by Glyn Owen as the ship's captain Leylan. Owen's role is as a much more weary and reasonable man: he doesn't want trouble, whereas Raiker goes out of his way to find it. They typify one of the general trends in the series: the plots are often derivative and old-fashioned, particularly in this first season, but they're compensated for by decent character actors playing unexpectedly fleshed-out characters. Except perhaps for Gan. Oh poor Gan. Actor David Jackson did his best, but the tall, muscular 'heavy' of the Blake's 7 gang simply isn't a well-realised or interestingly written part. He's more often than not there to service a plot point, or to fill up the numbers and is never a particularly interesting character.

Things pick up considerably in the final third when the prison transport ship London stumbles upon the remains of some massive space battle, and an enormous alien spacecraft lying dead in space. Once it arrives the episode changes tack entirely, from prison break caper to creepy expedition into the unknown. The alien ship (christened "the Liberator" in the next episode) is a beautiful piece of design, although the technical limitations of the series don't always show it in the most flattering or attractive lights.

So episode 2 comes to an end: Blake, Avon and Jenna have escaped captivity in a massive alien super-ship, and Blake's first act is to send them off after the London to rescue their fellow prisoners from Cygnus Alpha, because apparently a planet full of murderers and hardened criminals is the best place to start a democratic revolution. Oh Blake: such poor human resourcing. Trusting these people is going to catch up with you one day...

Two episodes in, both entertained me immensely - although that might be the nostalgia talking to a certain extent. At any rate, I'm really enjoying revisiting the show so far.
Posted by Grant at 9:32 PM