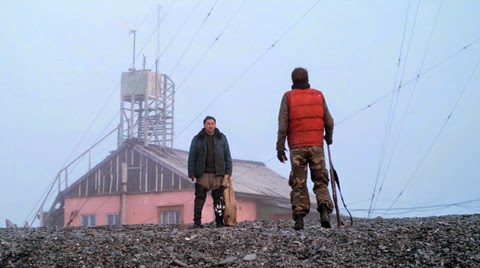 Pavel and Sergei both work in an isolated meteorological station in Russia's far north. Every day they step out into the frozen coastal tundra to take radiation readings from a group of sensors in the area. When they head out, they have to go armed in case of polar bear attacks. Once the readings are made, they use a radio to report them back to Russia's science ministry. Sergei has worked here for years, and is a gruff, impatient bully. The much younger Pavel only took the assignment so that he could write an article about it, and spends most of his days either playing first-person shooters on the station computer or listening to pop music.

Sergei heads out to go fishing for ocean trout, leaving Pavel behind to cover for his absence. While he's gone, the ministry radios in to inform him that his wife and child have been killed in a car accident. Pavel, who's terrified of the violently aggressive Sergei, can't bring himself to pass on the message. The longer he waits, the worse the situations gets.

How I Ended This Summer is a 2010 thriller by writer/director Alexei Popogrebski. It's a wonderfully stark and lonely sort of film: it's shot out in the middle of nowhere, with constantly blowing Arctic winds. It's got a cast of two actors. It becomes such a tense viewing experience in part because we've got nowhere else to go. Pavel can't escape from Sergei's bullying, and once he fails to inform Sergei of his family's death he's got no logical way to escape that situation either.

This is in many respects a classical tragedy, since the growing situation in which each man finds himself only exists because of their own flaws. Sergei is a relatively unpleasant person to be around, and constantly shoves and cajoles Pavel. At the same time Pavel is almost ridiculously lazy and passive. He does not have a complicated job to do, but he still irritatingly fails to do it. Both actors are excellent in their roles: with the story they're telling they have to be. In this sort of low budget, sparse thriller, there is no room for anyone to do anything but their very best.

It is a remarkably slow film, with Popogrebski choosing to linger on exceptionally long takes of characters in thought, or (more often) the bleak landscape outside. It's all down to a matter of choice: you could easily strip a solid 40 minutes out of this film, and you'd end up with a film that was a lot faster and more tense. On the other hand you could really take your time, as Popogrebski has, and really drive home to the audience just how isolated and vulnerable these men are. We get the first kind of film all the time. It's actually a relief to see this director take the less common route.
Posted by Grant at 1:57 PM