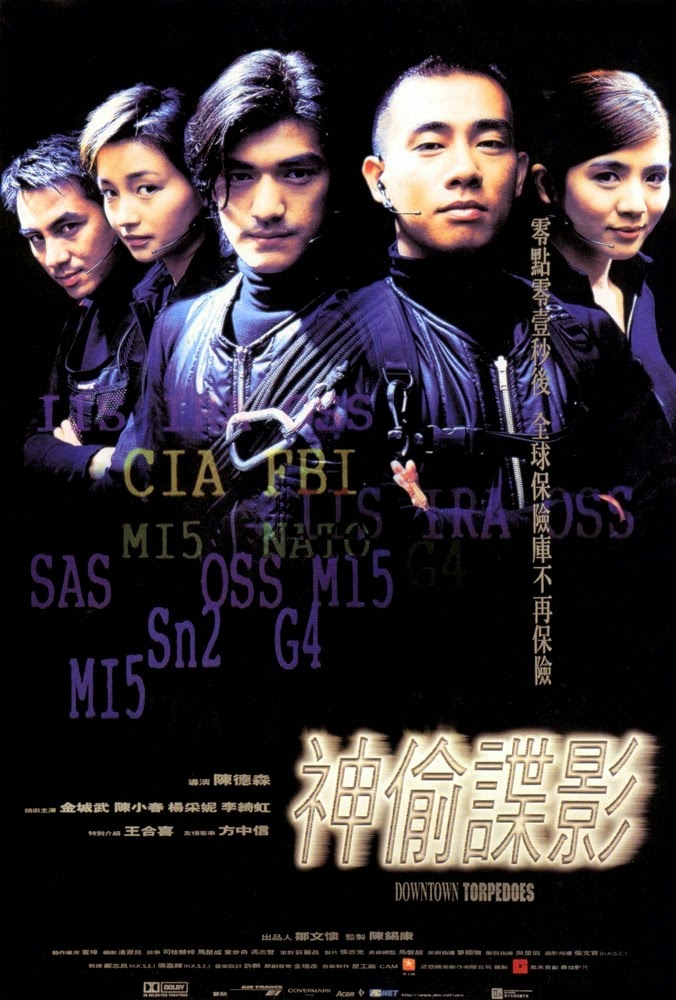 A team of operatives skilled in industrial espionage are apprehended by Hong Kong's secret service and blackmailed into undertaking a raid of MI:5. Their target is a set of British sterling printing plates that could, if released to the black market, devalue the Hong Kong dollar. As soon as they secure the plates, however, they are betrayed - sending the team on a mission of revenge.

Downtown Torpedoes is a 1997 action film directed by Teddy Chan and starring Takeshi Kaneshiro, Jordan Chan, Charlie Yeung, Theresa Lee and Alex Fong. Historically speaking it's a reasonably significant film in the Hong Kong movie canon. It was released on 7 August 1997, just over a month following the city-state's official handover from Great Britain the the People's Republic of China. For all intents and purposes, post-handover cinema commenced here, with a film that has Chinese secret agents fighting against the British authorities and emphasising to one another just how great a place Hong Kong is. It also kicks off a trend in Hong Kong cinema of producing glossy, American-style action films, high on movement and explosions but low on pretty much everything else.

Taken on its own merits, Downtown Torpedoes is fairly weak stuff. It establishes its cast in broad, one-dimensional strokes. Jordan Chan, then flying high on the success of the popular Young & Dangerous franchise, plays the money-obsessed "Cash". Takeshi Kaneshiro plays the serious and noble "Jackal". Everyone pretty much plays a plot cypher. There is no depth to the characters, and little beyond the actor's own personalities and popularity to make an audience care about what happens to them.

Instead the film attempts desperately to distract: fast-cut scenes of computer hacking get interspersed with shoot-outs and explosions. The story actually strains the film's production budget somewhat: there are a few scenes when events look strikingly cheap, and they jar against the more effectively directed punch-outs and gunplay. Teddy Chan directs the action pretty well, all things considered, and it's not a surprise to see he effectively kickstarted his career with this film. He jumped from here to Purple Storm and Jackie Chan's The Accidental Spy. By 2009 he had directed Bodyguards & Assassins, one of the best Hong Kong films of its year.

Certainly Downtown Torpedoes is representative of a particular style of late 1990s Hong Kong cinema, but it's arguable over whether or not it's a style worth revisiting so many years later. There are better action films to watch, including several by the same director. So of it's time, and in all honesty best left back there.
Posted by Grant at 8:50 AM