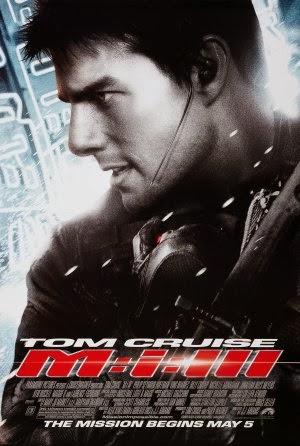 Six years after Mission: Impossible II and a whole decade after the original, Ethan Hunt (Tom Cruise) returned to the screens in a somewhat unexpected sequel. It was widely known that Paramount had been trying to produce a third film, but it also seemed to be burning through directors at a pretty aggressive pace (both Joe Carnahan and David Fincher were hired, worked on the film, and then departed the project having failed to develop a viable project under Paramount's conditions).

In the end it was TV writer/producer J.J. Abrams, then best known for Felicity and Alias, who assumed control of this third film and successfully brought it to the screen. It was his spy series Alias that proved excellent training for directing his first feature film, and indeed M:I3 resembles that series rather closely. It begins in media res, pushes the action very rapidly to an emotional crisis, and then jumps back several days to reveal the events that led there. In between there's plenty of running around, shooting at people, racing in cars and all of the other action ones expects from a solid espionage thriller.

It also features Philip Seymour Hoffman as the villain, and therein lies its masterstroke.

Hoffman was one of Hollywood's best actors, delivering consistently outstanding performances no matter what the project. He made any film he was in a must-see, and to be completely honest this was no exception. M:I3 is a quantum leap in quality beyond its predecessors, and its success is in large part due to Hoffman's arresting, oddly laconic performance as international weapons trader Owen Davian.

Elsewhere the film shows enormous improvements. Ethan Hunt is given a private life and a fiancée, and as a result more depth and dimension than he was afforded in both of his previous films put together. Michelle Monaghan is likeable as his fiancée Julia, who manages to both be unaware of Hunt's double life in a believable fashion and also able to take control of her own situation during the film's climax.

There's an honest-to-god IMF team working here as well, with Ving Rhames returning as Luther Stickell alongside new colleagues Declan (Jonathan Rhys Meters) and Zhen (Maggie Q). They feel like a team, and their operations - particularly a kidnapping staged inside the Vatican - have an authentic feel of the original Mission: Impossible TV series. For the first time these characters actually get to share scenes and dialogue when Hunt isn't there, raising them from supporting players to fully-fledged characters in their own right. Other supporting performances by the likes of Laurence Fishburne, Simon Pegg, Eddie Marsan and Billy Crudup are strong and well integrated.

The action in the film is innovatively staged and widely varied. Not only is J.J. Abrams skilled at knowing how to best present the action, he's unusually skilled at knowing when the action isn't needed at all. One sequence set in Shanghai focuses on Hunt infiltrating a secure skyscraper and stealing a cannister at Davian's behest. We see him enter the building, but we don't see him again until he's leaving under heavy gunfire: what happens in between is kind of irrelevant to the narrative, and Abrams is smart enough to know it.

Abrams is just as clever when it comes to 'the rabbit's foot', the MacGuffin that both Hunt and Davian pursue throughout the film. It's clearly some kind of weapon, or biological agent, but neither we nor Hunt ever find out what it is. We don't need to know, and Abrams knows this: keeping it a secret even through the denouement is making an enormous amount of fun out of genre conventions.

Sadly I think M:I3's quality went partially overlooked by audiences and critics, simply because it was the third film in a series. It's a quantum leap above its predecessors, and a wonderfully enjoyable film in its own right. It seemed odd at the time, getting a third film after a break of six years. By the time the credits were rolling I was desperate to see a fourth.
Posted by Grant at 10:53 PM