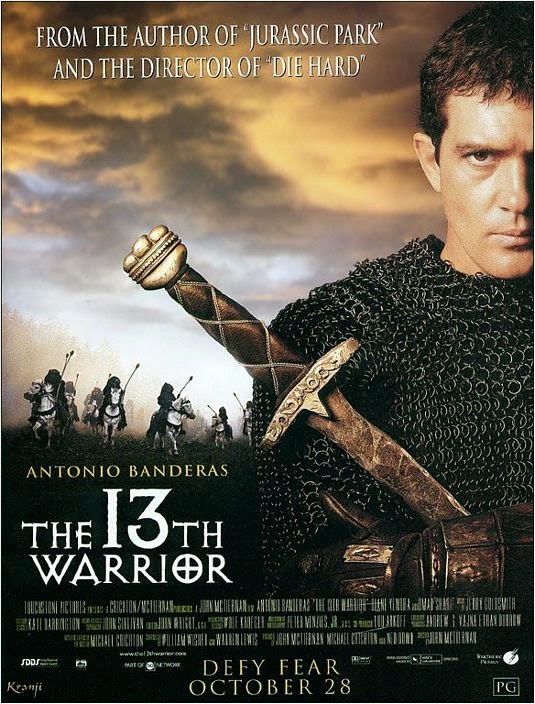 Some movies are good. Others are bad. A few sit somewhere in between: ones that demonstrate enormous potential, and that clearly could have been a great film had something in the production process not stepped in the way and fouled everything up. The 13th Warrior is definitely this third kind of a film. The short version: in the 1990s author Michael Crichton celebrated enormous commercial success in Hollywood. He had created ER, which had become the most popular drama on American television. The film adaptation of his science fiction novel Jurassic Park had become the most successful movie of all time. A string of his other novels all rapidly fell into production, including Congo, Disclosure, Rising Sun and Sphere.

At the same time Spanish actor Antonio Banderas had just enjoyed a one-two punch of starring in Robert Rodriguez's Desperado, which was an acclaimed minor hit, and then Martin Campbell's The Mask of Zorro, which was an enormous commercial smash. It seemed clear he was the next big action star in Hollywood, and all of the major studios were attempting to line up projects in which he could star.

Then throw in director John McTiernan, who had scored big with Predator in the 1980s, then re-invented the modern action film with Die Hard, then adapted Tom Clancy's popular novel The Hunt for Red October to great success.

At the crossroads of these three 'hot' talents lay Walt Disney Pictures, which owned the motion picture rights to Michael Crichton's novel Eaters of the Dead. The studio spent deep, and managed to score not just McTiernan to direct but also Banderas to star. It seemed a slam dunk for the summer of 1998.

Of course what actually happened was that Michael Crichton agreed to co-produce the film with John McTiernan, production costs overran wildly, Disney got cold feet over how much money was being invested in the project, test screenings went badly, and Crichton used his clout as Hollywood's golden goose to have McTiernan fired before taking over the production for a series of costly reshoots. The end result, retitled The 13th Warrior, was delayed from its original release date by more than a year, cost an estimated $160 million dollars to make, release and market, and made less than half of that back in cinemas.

So the storyline, for those who've never seen it: Ahmad ibn Fadlan (Banderas) is a court poet in 10th century Baghdad who, after being caught showing a romantic eye towards another man's wife, is dispatched to act as an ambassador to a northern European kingdom. En route he finds himself roped into joining a band of vikings, led by the warrior Buliwyf, on a quest to save their kingdom from an invasion of violent, bear-like monsters. It is effectively Michael Crichton's more grounded and realistic take on the Beowulf epic, with the real-life traveller and writer Ahmad ibn Fadlan inserted into the narrative for good measure.

It is obvious, upon watching The 13th Warrior, that somebody has run riot in the editing room with a pair of scissors and a hard-line agenda. Structurally speaking, this is a messy film. The first 20 minutes in particular feel remarkably incoherent, as the viewer is thrust from a viking longboat back to Baghdad for some quick narration then up to the Volga River for a quick cameo by Omar Sharif before we meet the band of vikings and get thrown back into that damned longboat.

Things settle down remarkably once Buliwyf, Ahmad and their 11 viking brothers arrive in King Hrothgar's besieged kingdom. That said, there's still ample evidence that something went awry in post-production. Two major subplots - one involving a love interest for Ahmad, the other political jostling between Buliwyf and Hrothgar's callow son - are introduced, partially developed, and then abruptly dropped from the film. The climax is strong, until you realise that it's not the climax, and that a second Crichton-directed finale drags the film along for another 10 minutes.

The sequences that stand out do so remarkably. The gathering of the thirteen warriors, the infiltration of the enemy's underground lair, and Ahmad's careful observation of the Northmen's language all stick in the mind. They point a far more entertaining, more enjoyable movie that studio and producer interference refused to let out. It is all backed by a great Jerry Goldsmith score.

Banderas is fantastic as Ahmad, and it's a genuine pleasure to see Hollywood presenting a positive, likeable Muslim protagonist in a big-budget film. Dennis Storhøi is also very strong as Herger, the viking with whom Ahmad becomes closest friends. Beyond that, the cast do pretty much exactly what they're required to: be strong, powerful warriors with a strong sense of camaraderie.

How much one enjoys The 13th Warrior really boils down to how much latitude one gives it. There's great stuff in here, but there is also dull, incoherent parts as well. One partially masks the other, leaving you watching not so much a great film as the potential of one.
Posted by Grant at 9:04 AM