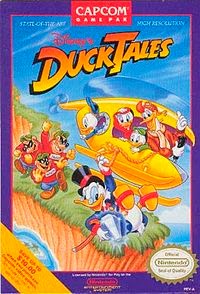 For a while there, the platform game and Walt Disney animation seemed to go hand-in-hand. There were so many great platformers based on Disney productions, particularly during the SNES/Megadrive years where games like Aladdin and The Lion King really managed to rival the games being designed for those consoles with wholly original IP.

That stream of quality Disney games arguably began back in 1989 with games like DuckTales, developed by Capcom for the NES.

The game was based on the brilliant Saturday morning cartoon, in which Scrooge McDuck was accompanied by his grandnephews Huey, Dewey and Louie in adventures and escapades around the globe. It was a great property on which to base a videogame, since Scrooge's international travels allowed for a wide variety of settings and visual images for the game's various levels.

To adapt the property into a videogame,Capcom cleverly used the same creative team as their hugely popular Mega Man games. To their credit the design team didn't ever seen to take the property for granted: all too often licensed games are thrown together without inventiveness or enthusiasm, with the apparent hope that brand recognition would be enough to ensure the game's success. The fact is that DuckTales would have been a great game with its own characters - using the Disney ones just adds an extra layer of enjoyment.

In 2013 this game received an unexpected HD remake for the Xbox 360 and PS3: testament that, even at 24 years old, DuckTales was a game for the ages.
Posted by Grant at 7:46 AM