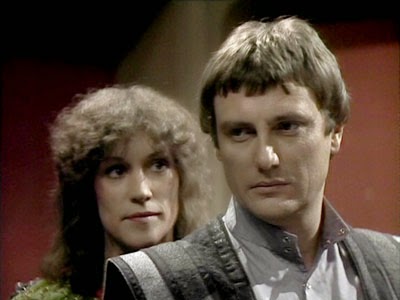 The Liberator intercepts a spaceship drifting out of control. When Blake, Avon and Cally teleport aboard they find the entire crew unconscious, save for the pilot - who has been murdered. The ship has been sabotaged and its precious cargo - a device intended to rid the planet Destiny of a virulent fungal infection - can no longer be delivered on time. While Blake races to deliver the device in the Liberator, Avon and Cally stay behind to investigate the murder and reveal the killer.

It is rather odd that, after hitting on such a perfect creative direction for the series in "Seek Locate Destroy", the very next episode is a by-the-numbers murder mystery, complete with confined setting, several suspects, carefully placed clues and a couple of red herrings. It really is completely unlike the previous six episodes, and sticks out like a sore thumb. It's also rather odd that, despite all of the above, it's a really enjoyable episode.

Part of the reason for its success is that it places Avon (Paul Darrow) centre-stage for the very first time. He's already established himself as the series' best-written character, and now he's finally given a chance to shine. When Blake leaves with the priceless neutrotope Cally remains on the Ortega as collateral to reassure the colonists that Blake won't run away with their livelihood. Avon, on the other hand, stays behind because he can't stand an unsolved problem. Paul Darrow has a ball with this episode, deliberately seeding Avon with unexpected and darkly funny responses: things that should intrigue a character appear to bore him, whereas news he should deliver with sympathy and regret he delivers with a sardonic smile and an inappropriate sense of humour.

It's a relief that Avon is so entertaining, because the guest cast are all dreadful. In most cases it's not due to poor acting - although there are one or two very obvious exceptions - but rather extremely lazy dialogue. No one has a personality beyond very broad strokes, and every line seems to have been crafted to be as stereotypical as possible. The regular cast don't fare much better. Gareth Thomas and Jan Chappell both benefit a little from their characters being given things to do. Michael Keating, Sally Knyvette and David Jackson all get left on the Liberator with maybe three lines of dialogue each.

All up this is a functional but unambitious episode that is completely saved by Avon. I suspect this won't be the only time I write that sentence as these reviews go on. Altogether it's just enjoyable enough to get a tick of approval. That leaves Season 1 with four good episodes out of seven, and a quality ratio of 57 per cent.
Posted by Grant at 9:13 AM