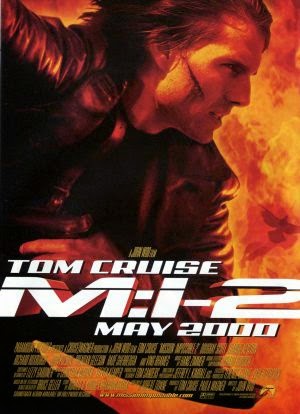 Four years after his first cinematic outing, IMF agent Ethan Hunt (Tom Cruise) returned in a long-awaited sequel. In this second film, directed by noted action director John Woo, Hunt enlists the help of an international jewel thief (Thandie Newton) to track down and stop a rogue IMF agent (Dougray Scott) who plans to sell a deadly engineered virus to the highest bidder.

It all sounds tremendously promising when written down like that. The truth is that Mission: Impossible II is a terrible film. No, more than terrible: it's an actively offensive film. Hollywood regularly makes films that are sexist, and that sideline or objectify its female characters - or in some cases exclude women from their narratives altogether. M:I2 goes one step further than that. Based purely on on-screen evidence, I'm pretty sure those in control of this film actively hate women.

Hunt's first task in the film - after demonstrating his extraordinary physical prowess by free-climbing a mountain - is to recruit notorious thief Nyah Nordoff-Hall (Newton) for his latest mission. He assumes it's because she's a skilled thief. I suspect the audience does as well. Of course Hunt's professionalism only extends so far, and before he actually receives his assignment he goes to bed with her as well. Then - quelle surprise - it turns out IMF only wants Hall because she's the ex-girlfriend of runaway agent Sean Ambrose (Scott), who appears to have killed a scientist and stolen some kind of deadly virus. Hall can infiltrate Ambrose's operation by sleeping with him again: a professional thief, sure, but really only required as a prostitute. 'She's not trained for this,' protests Hunt to his anonymous IMF handler (a surprising cameo by Anthony Hopkins). 'To go to bed with a man and lie to him?' replies the handler, 'she's a woman, she's got all the training she needs.'

The sight of Ambrose forcing Hall to undress, leering over her in the most repellent of ways, while Hunt watches a satellite feed like some intense, possessive boyfriend is enough to turn your stomach. An things don't improve for poor Ms Hall. She infects herself with the much-discussed virus during an action scene. The screenplay could have easily made it a pro-active decision: she's now the only source of the virus, thus temporarily saving her own life and giving Hunt time to locate the cure and stop the villain. Instead she cries and admits she doesn't know why she injected herself. It seems an odd thing to do in the middle of a gunfight: inject yourself with a killer virus. Then again, not a lot of the character motivations in this film make a lot of sense.

Poor Nyah: she's not a character, she's a prize. She's gifted with skills and then never allowed to use them. She simply gets passed, like a nice bauble, from Hunt to Ambrose and back again. Basically this is a film that systematically goes through, scene by scene, and robs its female protagonist of any power, agency or respect. Writer Robert Towne should be ashamed. Everyone who signed on to participate in the film should have a long, hard think about what they supported. It's utterly loathsome stuff.

It's also remarkably silly. We have the silly cliché of Hollywood viruses where the infected are completely healthy for exactly 20 hours, but then are dead people walking at 20:01. I'm no scientist, but even I'm reasonably certain that's not how things work. The film also indulges in hilarious Australia clichés - the film is set primarily in Sydney, yet Hunt's base of operations is a tin shack in a desert, surrounded by kangaroos.

Does anything work? Sure. The action is great. If nothing else John Woo knows his way around an action scene, and the film's climax for the most part works exceptionally well. Hans Zimmer composes a mean musical score as well, packed with percussion and blaring electric guitars. Stylistically it's very far removed from De Palma's formalised world of dutch tilts and men in hats, and to an extent that's a good thing. One of the things I've appreciated about the Mission: Impossible franchise is the manner in which each film is helmed by a different director with a distinctive aesthetic.

In 2000, as a much younger, less well-rounded filmgoer, I figured enough explosions and gunfights could compensate for any amount of risible dialogue and rampant misogyny. A decade and a half later and I'm slightly embarrassed to have ever forgiven this movie at all.
Posted by Grant at 9:44 AM