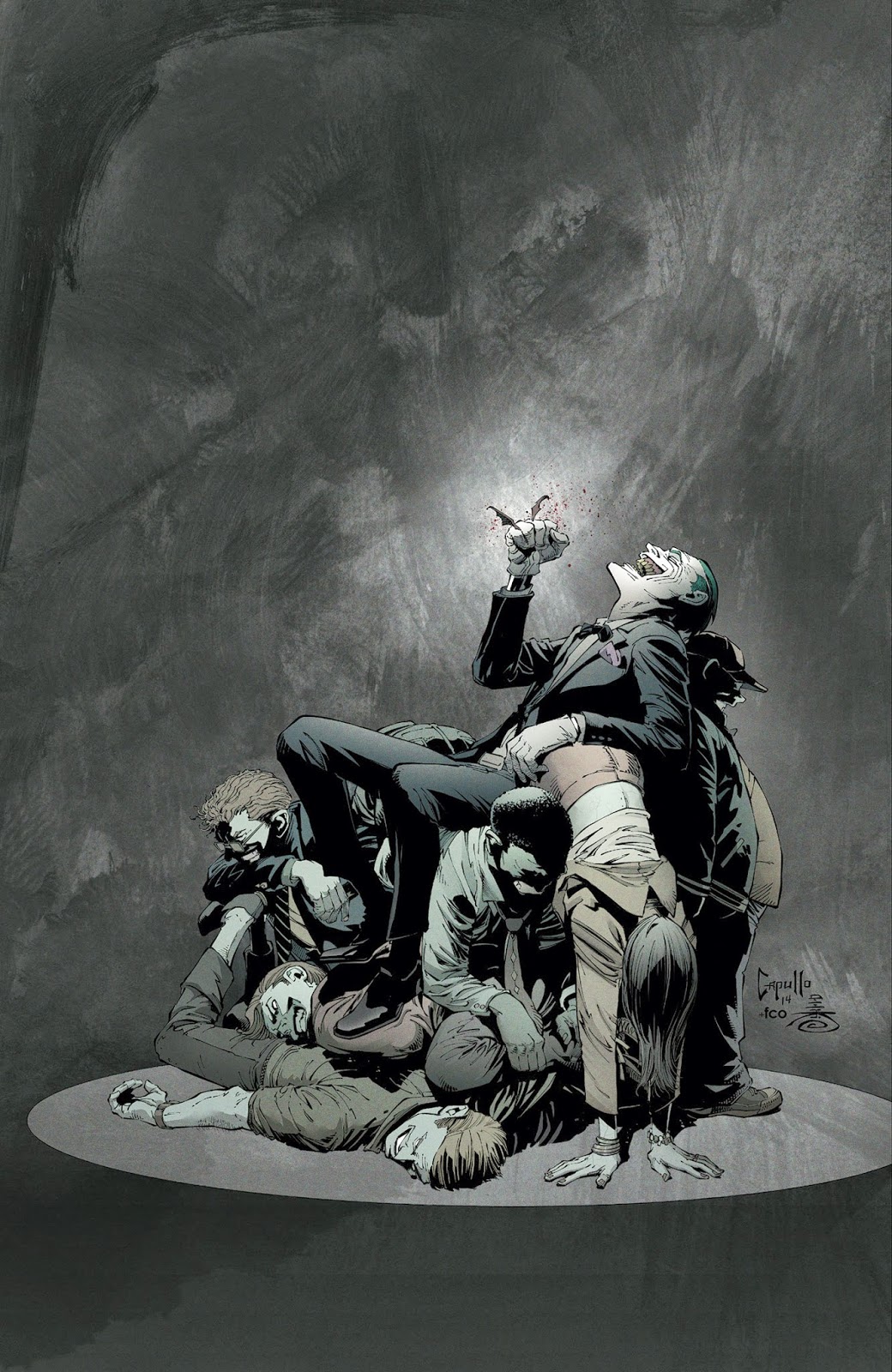 The penultimate issue of Batman's "Endgame" story arc delivers some shock moments of extreme violence, rapid story development towards the climax and quite the jaw-dropping surprise cliffhanger as Batman's forces gather together to stop the Joker once and for all. It's brilliant stuff, but it does raise quite a few questions, one of the key ones being: where the hell does Batman go from here?

There's always been an ongoing issue with the Joker, in that he's regularly so murderous and his body count so excessive that one wonders why somebody doesn't just step up and kill him. He's on an even darker rampage than usual in this story arc too.

Let's talk about it below the cut, to prevent unnecessary spoilers.

So here's the thing: at this stage in the storyline Jim Gordon has taken an axe to the chest - I assume he's now in an emergency department somewhere - and loyal butler Alfred Pennyworth has had his hand hacked off. The Joker knows that Batman and Bruce Wayne are the same person, and has "Jokerised" the vast bulk of Gotham's population. So we've got a bodycount that's reasonably expected to be among the thousands, and severe torture and assault on some of Batman's closest friends and allies.

Basically there are rules to superhero comics, and right now it feels like the Joker is breaking those rules. It's like when some aspiring writer attempts to tell the story of why Superman doesn't fix world hunger or create world peace: once you start poking that balloon you're going to pop it. As of issue #39, Batman is ready to pop. It's just a question of whether Snyder is going to pull off a masterpiece of an ending or blow the Batman Universe all over the place. Either way, I don't actually see this storyline ending with the Joker still alive. It is titled "Endgame", after all.

Batman races back from his encounter with R'as al Ghul. Hush breaks free from captivity. Gotham's villains all run riot. Gotham City is on fire. Basically the final act of Batman Eternal begins here, with five more issues to go. Scriptwise this is actually a fairly ordinary issue, pushing pieces to where they need to be on the game board, but not actually providing much else beyond what's perfunctory. Plus it's half about Hush again; that piece of crap is never going to fly no matter how many times DC shove him in our faces. It's all saved somewhat by Juan Ferreyra's excellent artwork, which gives everything a badly-needed boost. It may not be the week's most interesting read, but it is certainly one of the prettiest. (3/5)

Genevieve Valentine's re-imagining of Catwoman as a sprawling organised crime drama continues in an intriguing and effective fashion. Garry Brown's realistic, non-exaggerated artwork really helps to sell the book as well, making it clear this is an intelligent story for adults and not an over-sexed action book for teenagers. This issue received a bit of notice for a kiss shared between Selina Kyle and another female character, but it's a mountain out of a molehill: to be honest my biggest surprise was discovering Catwoman wasn't canonically bisexual already. The kiss here fits the characters and develops the story. If there's a criticism at all it's that, given all this maturity, appearances by the Penguin and Black Mask feel oddly out of place. (4/5)

Matt broods over inadvertently telling his girlfriend he loves her. It would seem childish of him, except of course pretty much every woman he's ever loved has wound up dead. And wouldn't you know it, within pages of him expressing this concern said girlfriend Kirstyn McDuffie has been kidnapped by a serial killer. You just can't cut a break if you're Daredevil: tragedy, angst and guilt are what he does. That said, there's a surprising amount of comedy in this issue two: Waid has a gift for this kind of thing.This current volume's ongoing storyline gets a sharp kick back into gear this issue, which is good to see. It ends on a highly ominous note indeed. (4/5)

I see Marvel are up to their old tricks, releasing more than one issue a month of a book to try and pick up momentum and get a bigger monthly market share. Thankfully when the book is as good as this one it's not as irritating as it could be. Vader is disgraced after the fall of the Death Star, and now finds himself under the command of Grand General Tagge. It's immediately obvious how this new relationship is going to go in the long-term, and this issue's biggest pleasure is watching Vader strain under the control of this arrogant Imperial commander and ultimately begin to turn the tables on him. There's much less unnecessary continuity porn in this issue, and that helps it a lot. The focus remains solely on Vader, whose characterisation is absolutely nailed by Gillen's script. I am really enjoying this comic a hell of a lot. (4/5)

It's taken five issues, but Gotham Academy finally slots with a satisfying clunk into the Batman mythos. It's immensely satisfying to discover not one but four narrative links to the broader Gotham City storyline, whether it's Killer Croc hiding among the academy's hidden passages, or one of the students revealing a link to another Bat-villain, or yet another having a link to the notorious Arkham Asylum. Then there's the cliffhanger appearance of... well, go read the book for yourself. This is a bright, imaginative comic book that's impressing me more each issue. (4/5)

This book is straddling a precarious line between original epic fantasy and being a blunt 1980s toy cash-in, and this issue slips very far into the latter category - so much so, in fact, that for the most part it's a bit like reading a 10 year-old play with some action figures. I do think there is a great comic to be made out of Masters of the Universe, but as DC's drunkenly staggered from one take to another, they're still seemingly no closer to nailing that comic down. I'll be interested to see what, if anything, they do with the property once this six-part miniseries winds up. What they're doing right now keeps showing promise without fully delivering the goods. (2/5)

For those following the plot of this science fiction re-imagining of the original Greek epic, this is the one where Odyssia meets the Cyclops. This book owes an enormous debt to French science fiction: not just comic works such as Metal Hurlant but also films like Rene Laloux's Les Maitres du Temps and Gandahar. It's visually lush, incredibly sexual in content and tone, and just generally eye-catching: Christian Ward is doing a brilliant job with it. Matt Fraction is writing the hell out of it as well, giving the book a slightly detached epic feel that really works in the context of the Odyssey retelling. I'm loving the hell out of this book, although I suspect it may be an acquired taste for some. (5/5)

Laura's investigation into Luci's death takes her to a dance party with Dionysus. There's an attempt to do something rather inventive in this issue, with dialogue taking place with a dance beat: each page divided into eight panels, each panel alternating between a number (1,2,3,4) and a conversation. It's one of those things where I can see the reasoning behind it, but the execution does fall a little flat. Overall it makes this issue slightly less impressive than WicDiv usually is. Hopefully this is a single-issue bump in quality and not a sign of things to come. (3/5)