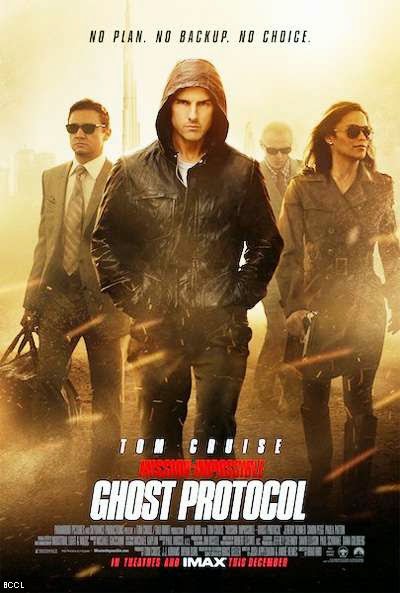 In Mission: Impossible: Ghost Protocol, a mission into the Kremlin goes disastrously awry and the entire IMF organisation is disavowed by the US government. Without any support, Hunt and his team must track down a Swedish nuclear strategist before he steals a set of Russian nuclear launch codes and sets off World War III.

While this film sees yet another change of director - this time to animation veteran Brad Bird - it retains much of the tone and feel of J.J. Abrams' M:I3. While the first three films all felt like very different takes on the format, Ghost Protocol is the first that actually feels like an honest-to-god sequel. At the same time it also feels remarkably refreshing: believe it or not, this is the first Mission: Impossible film that didn't feature a corrupt IMF agent at the centre of the narrative.

The film introduces Jeremy Renner as William Brandt, an IMF analyst who is being groomed into eventually replacing Ethan Hunt as the star. This isn't just a suspicion based on the plot - during the film's publicity campaign Paramount made no secret of it. Of course while Renner is returning for Mission: Impossible: Rogue Nation mid-year, it's still in a supporting role behind Cruise, so who knows if and when he's going to actually take over.

There are two things that really set Ghost Protocol apart from its predecessors. The first is the quality of the action. Even more than M:I3, it's fast, smart and widely varied. Whether it's a riot in a maximum security prison, a last-minute climb up the outside of the tallest building in the world, a chase through a sandstorm or a fistfight down a mechanised multi-story car park, it keeps shifting, upping the ante and refusing to pause long enough for the audience to think too much. This is good: action movies should be paced like this. It's all tremendously enjoyable.

The second great strength of Ghost Protocol is its humour. This is the first Mission Impossible film to properly relax and stop taking itself so seriously. It's got jokes, funny lines, humorous situations; it never feels forced, and it all adds up to make the film so much more enjoyable than the other three films.

It's also nice to finally see the female member of the IMF team - this time played by Paula Patton - actually demonstrate some agency and have an action scene of her own. She's convincing, appealing, competent at her job, and doesn't wind up a love interest for anybody.

This is my favourite of the Mission: Impossible films. It does everything right, plays to each of its cast members' strengths, acknowledges its own past (there's even a callback to the original 1996 film) and doesn't outstay its welcome. It's unusual to see a movie franchise improve as it goes on: I'm so used to it being the other way around.
Posted by Grant at 10:25 PM