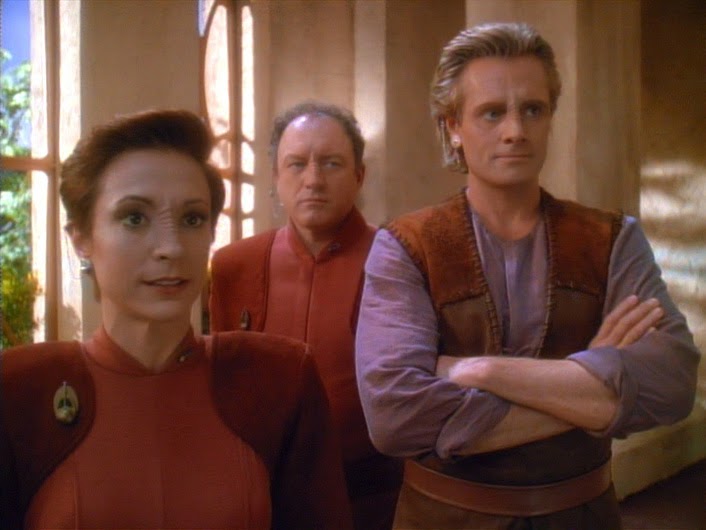 Major Kira (Nana Visitor) is dispatched to negotiate with Bajoran farmers who refuse to return valuable equipment to their government. When the leader of the farmers - Kira's former resistance commander Shakaar - persuades her of how badly they need the equipment, she changes sides to defend the farmers instead.

In other news I fell into a coma and nearly died. This episode nearly killed me. It took several goes to get through because it was incredibly easy to find more important things to do. I'm not quite certain how they managed it, but the Deep Space Nine production team managed to create what might be the most boring episode of Star Trek ever made. It's not technically incompetent, and the storyline makes sense. It is simply excruciating to watch, and irredeemably dull.

Part of the problem is that it is simply too familiar to other things we've seen before. We've seen Major Kira beam down to negotiate with a farmer before, in Season 1's "Progress". We've seen her reconnect with a former resistance leader before, in Season 2's opening trilogy. We've certainly seen her butt heads with Kai Winn on several occasions, and while this episode does advance Kira's personal storyline (effectively, flirting with Shakaar gets her over mourning for Bariel) it does it in the most obvious of fashions.

The performances are generally solid. Certainly Nana Visitor does her best to overcome the material, as does Louise Fletcher as Winn. Duncan Regehr makes the first of his three appearances as Shakaar, but he is really, really boring. I still can't quite work out if it's that his character is boring, or that his performance is contributing to it as well. Either way he's not terribly watchable.

This is definitely one episode of Deep Space Nine you can afford to miss. It leaves Season 3 with 17 good episodes out of 24, and a quality ratio of 71 per cent.
Posted by Grant at 9:16 AM