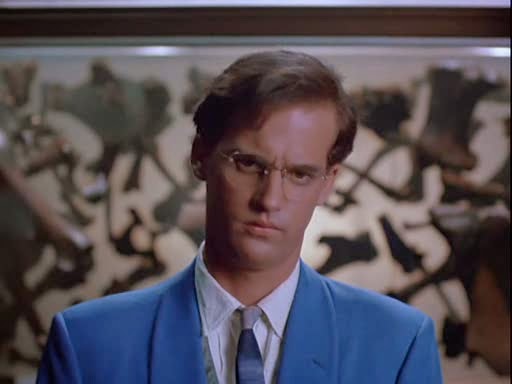 Imagine you were walking past a public telephone and it starts ringing. You pick up out of curiosity, and get what appears to be a wrong number - what seems to be a young military officer warning his father of an imminent nuclear strike. What would you do? Who would you tell? This dilemma is at the heart of Miracle Mile, a 1988 thriller written and directed by Steve De Jarnatt. Anthony Edwards plays Harry, a Los Angeles big band musician who misses a date with a girl named Julie (Mare Winningham), accidentally takes the wrong phone call, and then struggles to get out of Los Angeles with Julie in tow before it's too late.

It's a strange, slightly off-kilter film. It juggles tense drama with blunt satire of late 1980s 'yuppie' culture. It also walks a careful balancing act. The phone call Harry received could be a joke, or a mistake. On the other hand it could be frighteningly real. De Jarnatt deliberately keeps the audience in the dark until the film's final minutes.

There's an odd heightened quality to the film, whether it's that the sets and costumes are just one shade too bright, or the performances are just very slightly exaggerated and scripted in rather broad strokes. In the film's opening scenes this stylistic choice seems very slightly irritating, but as the situation develops and Harry's warnings of impending catastrophe spread from person to person, it all becomes rather appropriate.

It's a cleverly staged build, as Harry's night slowly descends step by step in some surreal form of hell. People start reacting in unexpected ways. Crimes are committed. More than one person dies. As his situation gets more and more irrevocably dire, the question lingers in the back of the mind: is the nuclear threat actually real? De Jarnatt cleverly plays the narrative out in close to real time, giving everything an appalling urgency.

Anthony Edwards would gain worldwide fame five years later as the star of NBC's ER, but here he plays an engaging and rather likeable lead. He's strikingly ordinary, and that helps sell the story as it spirals further and further to the edge. Mare Winningham is similarly convincing as his girlfriend Julie, managing to portray a realistic and fallible character despite some egregiously 1980s hair and clothing. The film is littered with performances by actors who will have you pointing at the screen and trying to remember where they're from, including Denise Crosby, Mykelti Williamson, Kurt Fuller and Brian Thompson.

In the end, Miracle Mile is probably just a little too off-kilter and exaggerated to be called a brilliant film, but it is certainly a rather good one and very memorable. This was only De Jarnatt's second film as director, after the faulty but rather promising Cherry 2000. After this he moved into television, which strikes me as cinema's loss.
Posted by Grant at 10:28 PM